Wednesday was a pretty light day in terms of the tournament outlook but the bracket still saw a shakeup thanks to two bubble teams suffering untimely losses and Boston University claiming the Patriot League title over Colgate on the road.

Entering the day, Xavier and Stanford were among the last four in and needed to avoid losses Wednesday to stay in the field. Unfortunately, neither of them were able to take care of business as DePaul and California, respectively, knocked them out and may have sent both to the NIT...if we have an NIT. We'll get to that in a moment.

As a result, both are currently out of the field and UCLA and North Carolina State have moved in heading into their respective conference tournaments...or so they thought.

As of early Thursday afternoon, a host of conference tournaments for 2020 have ceased to exist due to the Coronavirus. Those conferences include the ACC, American Athletic, Atlantic 10, Big Ten, Big 12, Conference USA, MAC, Pac-12 SEC, and WAC. We're really starting to think about the possibility of the NCAA Tournament not happening next week, if at all.

The NCAA has already announced the tournament will be played without fans in attendance. It's now very likely they suspend the tournament, following the season suspensions of the NBA and MLS and, likely, the NHL.

We will certainly continue to monitor the situation. As of now, here is the latest projection. The WAC, as of now, was the only conference to officially announce which team would receive the automatic bid to the NCAA Tournament (though New Mexico State was the overwhelming favorite anyway). The interesting note here is that Cincinnati was set to be the No. 1 seed in the AAC tournament. If there is an NCAA Tournament, the conference canceling the tournament may have given the Bearcats a free pass into the NCAA Tournament. We'll find out. 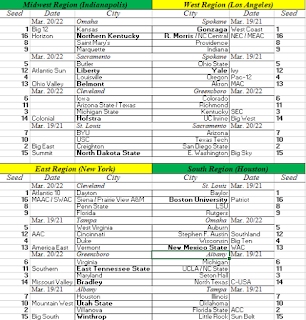 Five more tickets were punched on the court Tuesday (not including Yale's due to the cancellation of the Ivy League Tournament).

Gonzaga exacted revenge on Saint Mary's from last season's West Coast final, 84-66, to reclaim the crown and lock up the No. 1 seed in the West Region come Sunday when the brackets are revealed. Saint Mary's should be fine as well, but likely will find themselves in the middle of the bracket, most likely an 8/9 game. 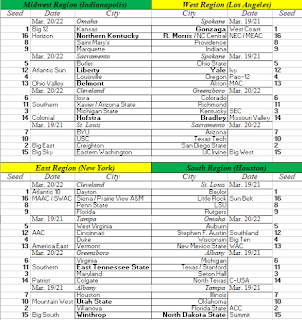 One more bid was handed out Monday to the NCAA Tournament as bubble teams everywhere breathed a sigh of relief for the time being.

East Tennessee State pulled away in the second half to defeat Wofford in the Southern Conference final and kept an at-large open for other bubble teams, as the Bucs might have had a case to be selected even with a loss.

Elsewhere Monday, San Francisco gave Gonzaga all they could handle in the West Coast semifinals, but the Bulldogs held off the Dons, 81-77, to advance to tonight's championship against Saint Mary's, who needed a late shot by Jordan Ford with 1.4 seconds left to defeat BYU, 51-50. The Gaels are in a much better position this year than they were last season, when they needed the automatic bid to dance. A win tonight likely ensures, however, they'll wear their home whites in round one.

Early Tuesday, we saw a surprise entrant into the NCAA Tournament. Due to concerns from the Coronavirus, the Ivy League decided to cancel the men's and women's conference tournaments this weekend. As a result, Yale, as regular-season champion, gets the automatic bid, just like the old days of the Ivy League, awarding the bid to the regular-season champion. Princeton will represent the league for the women.

Five more bids are up for grabs tonight, starting with three games at 7:00. Those will be in the Horizon League (UIC vs Northern Kentucky, ESPN), Northeast (St. Francis (PA) at Robert Morris, ESPN2) and Colonial (Hofstra vs Northeastern, CBSSN).

At 9:00, Gonzaga meets Saint's Mary's on ESPN for the West Coast title and ESPN2 has the Summit League final between North Dakota and North Dakota State.

Not much change in the bracket other than to show the automatic bids for East Tennessee State and Yale. Likely not much for tomorrow either, but Thursday's bracket might start looking a little different so stay tuned. 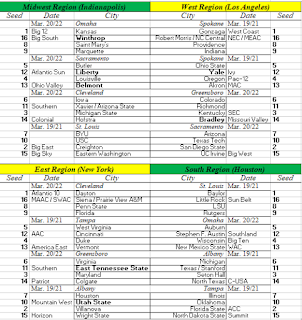 With Monday kicking off Championship Week and five tournament bids officially being punched, the tournament field is beginning to take shape. As always, this week will really help determine who is in and who is out.

We already saw some bubble action over the weekend as Utah State removed any doubt regarding their inclusion in the tournament. Stan Merrill's three-pointer with 2.5 seconds left gave the Aggies a 59-56 win over San Diego State to claim the automatic bid and ensure the Mountain West will be a two-bid league. They also have knocked the Aztecs down to a No. 2 seed with Dayton moving up to the top line.

Of course, that may work in the Aztecs' favor, as they now can be slotted for the West region rather than the East and potentially set up a Gonzaga-San Diego State battle for a spot in the Final Four.

Other automatic bids were awarded to Bradley (Missouri Valley), Winthrop (Big South), Liberty (Atlantic Sun) and Belmont (Ohio Valley). Monday sees another bid on the line in the Southern Conference as East Tennessee State battles Wofford. ETSU might have an at-large case if they lose, as they own a win over LSU in Baton Rouge. Of course, they'd rather eliminate any doubt and simply punch their ticket tonight.

Let's take a look at the latest field, where the automatic bids are simply the highest seeds in each conference, which is why Cincinnati is now in the field as the No. 1 seed in the American Athletic. 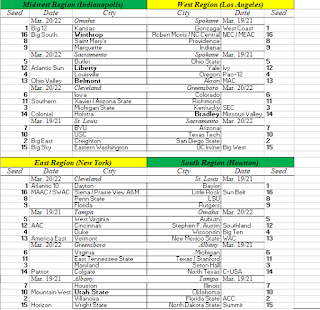 The final regular-season weekend is upon us and we're already seeing some shifts in the bracket from the smaller conferences.

Northern Iowa just gave themselves a long wait until Selection Sunday after their stunning loss Friday against No. 8 seed Drake in the Missouri Valley quarterfinals, a tournament that is already bringing more Arch Madness as the Nos. 6 and 7 seeds (Missouri State and Valparaiso) also advanced to today's semifinals and one of them will play for the automatic bid tomorrow.

As for UNI, it's time to wait and see if they've done enough to convince the committee to give them an at-large bid and make the Missouri Valley a two-bid league. The Panthers have a top-50 NET ranking but only have one quadrant one victory at Colorado. They do also own a neutral-court victory over South Carolina. The question now becomes will that be enough to overcome three quadrant three losses, including the early tournament exit from Drake by 21, a team UNI beat by ten at home and by 27 on the road. As of now, the Panthers sit among the first four out and may have to hope some of the other bubble teams ruin their own chances over the next eight days.

You'll also notice Tulsa is currently in the field as the leader in the American Athletic Conference and can win the regular-season title outright with a win at Wichita State Sunday, the first team out of today's field.

A couple of wins has put Purdue back in the mix. 16-14 certainly looks a lot better than 14-14, which is where Purdue was a few days ago. They'll want to defeat Rutgers today to feel better about their hopes. A loss today puts them at 15 losses and they would likely reach 16 after the Big Ten tournament. No team has ever received an at-large bid with 16 losses. The Boilermakers also sit among the first four out today.

Then there's UCLA. Those six quadrant one wins might be too much to ignore for the committee, even with the 77 NET ranking (which can still improve). The Bruins have season-sweeps of Arizona and Colorado, plus a split with Arizona State. A win over USC gives them at least a share of the Pac-12 title with Oregon and that should also resonate well with the committee, especially since UCLA is the seventh team out of the conference in this projection.

Saturday will also see the first two tickets officially punched to the big dance, as automatic bids will be handed out in the Mountain West and the Ohio Valley. The Mountain West moved their tournament up a week. We have the expected championship match between San Diego State and Utah State. The Aztecs can all but secure the last No. 1 seed with a win. A loss opens the door for Dayton to claim that spot. Both teams are in search of their first-ever No. 1 seed in the tournament.

San Diego State is set for their best seed since being a No. 2 in 2011, while Dayton hasn't been seeded this high since earning a No. 4 seed in 2003, meaning the Flyers are set for the highest seed in their tournament history.

Utah State can take themselves off the bubble by punching their ticket tonight, while also causing more worry for the other bubble teams. The Aggies are currently among the last four in. Wins over Florida and LSU definitely look good and may still push them in regardless. But a win would end any debate.

The other championship is yet another Murray State vs Belmont battle in the Ohio Valley. This is the third year in a row the Racers and Bruins are meeting in the final. Murray State has won the last two Ohio Valley titles, with 2019 seeing both teams make the NCAA Tournament after the selection committee gave Belmont an at-large bid.

Here's a look at the last tournament field. 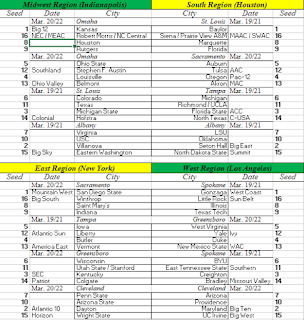 We have now reached the point of the season where conference tournaments are set to begin and we are less than two weeks away from Selection Sunday. A lot will certainly change, as is evidenced by today's bracket. For one, you will notice UCLA is in as the Pac-12 auto-bid. They sit a half-game ahead of Oregon and can clinch at least a share of the Pac-12 title with a win over USC Saturday.

Also creeping up the charts is Texas, who sit as the second team out in this update but a spot is right there for the taking for the Longhorns. And Providence just keeps on winning and has moved directly into the main bracket, avoiding the First Four.

This will be a quick update as we now will check out the full field of 68. 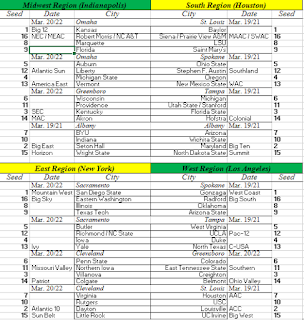 Bracketing from the NFL Scouting Combine

Pulling some double duty here as I post an updated bracket from Indianapolis at the NFL Scouting Combine and where the Big Ten will soon hold their conference tournament and Midwest Regionals will take place in the NCAA Tournament. A lot happening here in Indianapolis over the next month. 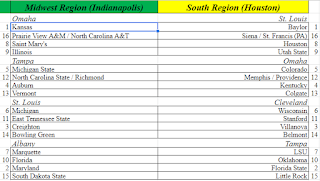 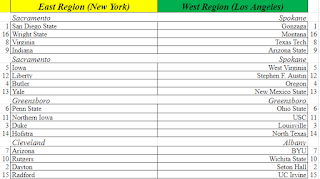