Welcome back, my friends! The Bracketology Corral is back in action as the 2014-15 NCAA Basketball season begins Friday. It feels like just yesterday we were watching seventh-seeded Connecticut team take down eighth-seeded Kentucky in the finals of what was one of the more thrilling NCAA Tournaments that included an 11-seed advance to the Elite Eight.

But that's in the rear-view mirror and now we begin the road to Indianapolis and the 2015 Final Four.

To get things started, here is my first bracket of the new season. And remember, it's November. Things will change very quick, but it's always fun to try to piece together some kind of puzzle and have something to build off of. So with that in mind, enjoy.

Kentucky, Arizona, Wisconsin and Duke make up the top line in this bracket with Kansas, North Carolina, Florida and Louisville on the two-line. Defending champion Connecticut sits as a No. 4.

And now, for the first time this season, the full bracket. 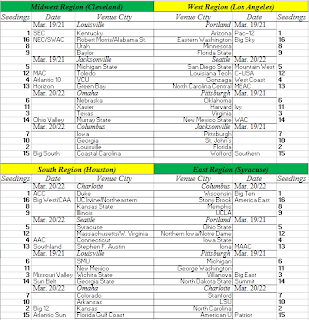 Credit to Gary Gerba for the bracket design.
Posted by Bill_Riccette at 6:31 PM