John Gillon's buzzer-beater on Wednesday against Duke not only sank the Blue Devils that night, but also moved the Orange into the field, among the last four in. Despite an RPI of 76, the Orange are 6-6 against the RPI top-50, a record that could bode very well come Selection Sunday, unless the committee knocks them for the fact that all six wins came at home. They only have two wins away from the Carrier Dome, at Clemson and at NC State. But still, six top-50 wins, with this bubble, could be hard to ignore. That could change Sunday when they visit Louisville. Win there, and the Orange all of a sudden are in much better shape.

It's a similar reason, plus a recent slump, that has TCU now on the outside looking in. The Horned Frogs only have two top-50 wins, Illinois State and Iowa State. And only one of those teams is safely in the tournament. I'll leave you to figure that out.

TCU is just 2-9 against the top 50 and only one road top-100 win out of five (Kansas State). The Frogs sit as the first team out of the field. The last team in is California. While they're just 1-7 against the top-50, that win did come on the road against USC, plus they have a neutral-court win over a Princeton team that is just outside the top 50. Just goes to show how soft the bubble is and how important conference tournaments will be.

TCU does host West Virginia Saturday. A huge chance there. A win could move them back into the field, as it would be their third top-50 win and keep alive hopes of a 9-9 conference finish, though 8-10 wouldn't completely write them off. This before a huge bubble battle with Kansas State on Wednesday, then a visit to Oklahoma to face the Sooners. This means TCU needs at least one of West Virginia or Kansas State. Lost both, and it's likely the NIT for them.

Speaking of huge bubble games, Marquette visits Providence today. The Friars won at Marquette earlier in the season and are coming off a big win at Creighton. The Golden Eagles are among the last four byes, while the Friars are currently bound for Dayton. That could switch if Ed Cooley's team pulls off the season sweep.

Two major games loom at the top of the bracket today, as well. Florida visits Kentucky in what almost amounts to a de facto SEC championship game, and a chance for the Gators to solidify a No. 2 seed, as well as UCLA against Arizona. Just like Florida, Arizona is potentially playing for a No. 2 seed, as they eye the Pac-12 crown.

A few other games of note for Sunday include Butler at Xavier and Wisconsin at Michigan State.

With that, here's your bracket update. 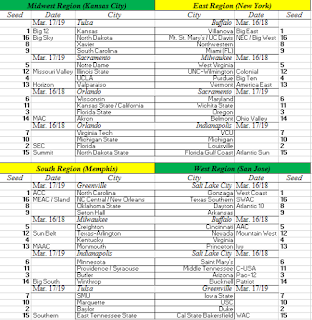