Bracketology: Louisville now on outside looking in

The latest bracket update here in the corral doesn't see too much change at the top, other than Virginia now sitting as the overall No. 1 seed after Villanova surprisingly fell against St. John's, who had themselves quite a week after also defeating Duke. Purdue and Xavier also remain atop the bracket

On the other side of the bracket, a rival of Duke's now finds itself on the wrong side of the cut line. With just one RPI Group 1 win and just three against the top two groups, Louisville is now in position to sweat on Selection Sunday, unless their fortunes turn around soon.

Louisville will be an interesting case for the committee. Their computer and metric numbers are not all that bad.

However, the Cardinals are just 1-6 against the top RPI group. The lone win was at Florida State. The losses came home against Seton Hall and on the road against Virginia, Clemson, Purdue, Kentucky and Miami (FL). Louisville is also just 2-2 against Group 2, beating Virginia Tech at home and at Notre Dame, with home losses to Syracuse and Florida State,

A non-conference strength of schedule rank of 83 looks good at first, but Louisville's best win in that part of action came against Southern Illinois. They're also just 3-5 in games away from home, the wins being at Florida State and Notre Dame, plus a neutral-court win over Memphis.

The committee has said they will use the metric numbers more, so it'll be interesting how they would view the Cardinals, should that event arise.

Three ACC teams, Syracuse, Virginia Tech and Louisville, make up what are essentially at-large teams Nos. 36, 37 and 38. That's also helped by the fact that the Mountain West now has two teams in the field with Boise State currently the auto-bid, meaning Nevada would steal a bid.

Syracuse is joined by yet another ACC team, North Carolina State, along with UCLA and Houston in the First Four. 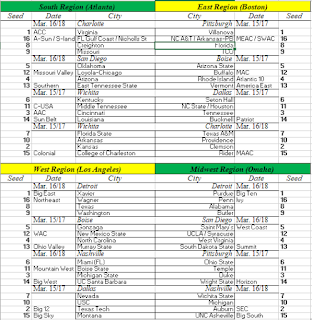