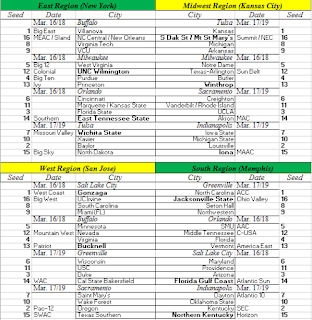 On the Big 12 side, Kansas State scored a huge win over Baylor to advance to the Big 12 semifinals where they'll meet West Virginia. The Wildcats were already sitting just above the cut line and beating a top-ten RPI team for the second time, this time in the conference tournament, with this at-large pool, might just be enough to push them into the field, even if they have to start in Dayton. This gives K-State four top-50 wins and six top-100 wins. The negative is the weak non-conference schedule, ranked 227th, though it would gain some luster if Colorado State wins the Mountain West tournament,

TCU kept their at-large hopes alive by upsetting top-seed Kansas, who was without a suspended Josh Jackson. This was the Frogs' third top-50 win but only their fourth top-100 win. To put their entire resume in perspective, they have just one more top-100 win than they do sub-100 losses, four versus three, as they've lost at Texas Tech and Oklahoma and home against Auburn. TCU likely needs to win the Big 12 tournament to make the NCAA Tournament. TCU takes on Iowa State tonight in the semifinals.

As for the Big Ten, Illinois and Iowa did themselves no favors, losing badly to Michigan and Indiana, respectively. The Hawkeyes were on the outside to being with, but the Illini may have played themselves out. After beating Northwestern, the lasting memory Illinois gave is losing at Rutgers and losing by 20 to a Michigan team that didn't arrive in D.C. until three hours before tip-off and had to wear their practice jerseys for the game. The Illini look NIT-bound.

Indiana, on the other hand, has played their way back onto the bubble, though their mid-season stretch is still holding them back, despite the wins over Kansas and North Carolina. Don't forget that those wins sandwiched a bad loss against IPFW. Nebraska falling outside the RPI top-100 doesn't help matters either. The Hoosiers may be in the same position as TCU, probably needing the automatic bid to get in. They meet Wisconsin in the Big Ten quarterfinals.

Also scoring a big win and securing their spot in the field is Xavier, after they knocked off second-seeded Butler in the Big East quarterfinals. The Musketeers ended their skid at just the right time, setting up a semifinal meeting with Creighton. They're likely going to be a double-digit seed, but this should them avoid playing in Dayton next week.

Moving into the field, replacing Illinois, is Rhode Island, who was a preseason top-25 team. The Rams are still hanging their hat on their win over Cincinnati and also beat VCU at the end of the season. The sport a top-50 RPI and gained three top-100 wins thanks to George Washington and Davidson moving in. They'll play St. Bonaventure today in the Atlantic 10 quarterfinals.

We're getting closer to filling out the field. Championship matchups will be determined tonight, while other conferences enter their quarterfinal round. Here's your rundown for today.