As we enter Championship Week and the final week before Selection Sunday, four teams have officially punched their ticket to the NCAA Tournament. Jacksonville State (Ohio Valley), Wichita State (Missouri Valley), Winthrop (Big South) and Florida Gulf Coast (Atlantic Sun) can sit back and relax, knowing their name will be called come Sunday. Particularly Wichita State, who would've had to sweat again had they lost, though they might have looked the part for an at-large anyway. In any event, they do not have to worry, as they have the automatic bid. It's the team they defeated to win the Valley that will have to sweat out the week. More on that after the bracket. 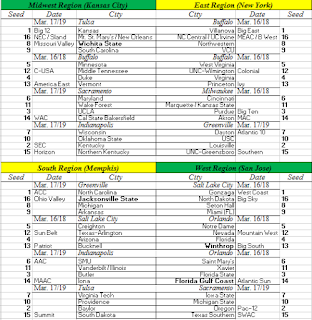 Both Wichita State and Illinois State had at-large cases, so it made for a dramatic final. Unfortunately for the Redbirds, they lost by 20 and now leave their fate in the committee's hands. ISU owns just one top-50 win, January 14 against Wichita State, Their only other top-100 win was back on December 3 against New Mexico. They do sit 34th on the RPI table. However, they also lost at Tulsa and at Murray State, the latter being ranked 232nd in RPI.

They're basically in the position Wichita was in last season, but you could argue the Shockers last year had a better profile than Illinois State does this year. Last year's Shockers also only had one top-50 win, but that was against a Utah team that was ranked No. 25 at the time and would eventually earn a No. 3 seed in the NCAA Tournament. Their best argument may just be their record, which sits at 26-6 (actually 27-6, but their team sheet will say 26-6, as the committee does not recognize non-Division I games, as one of their wins came against D-II Ferris State), and their high RPI.

One team Illinois State will likely be up against for the final few spots is Vanderbilt. The Commodores have 14 losses. While a group of teams have gotten at-large bids with 14 losses, mostly the group of five in 2011, no 15-loss team has ever been selected by the committee. That could change this season after Vandy pulled the season sweep of Florida to not only add another big top-50 win but stay at 14 losses. A loss would have made things very difficult by already sitting at 15 losses and likely getting No. 16 in the SEC Tournament.

In fact, the possibility is there for Vanderbilt to go 3-0 against Florida if they get past Texas A&M in the SEC's second round, as the win also moved them out of the 8/9 game, avoiding Kentucky. If the Dores can indeed beat Florida for the third time, even if they lose in the semifinals, likely against Arkansas, they may, in fact, receive an at-large bid despite losing 15 games.

Another bubble team from the state of Illinois went ahead and made a mess of things for themselves. Things were going well for them. They swept Northwestern, they just beat Michigan State and they were headed to Rutgers to get to 9-9 in Big Ten play and help their cause. And they go and lose. That puts the Illini at 8-10 in the conference, but they still own three top-50 wins, including a neutral-court win over VCU. But to feel a bit safer, they may need to win a game or two in the Big Ten tournament,

A few more automatic bids are up for grabs today. Here's your full list of games for today.

Posted by Bill_Riccette at 7:53 AM