I said Saturday's update would be the last one of the regular season. Then a lot of changes happened, both on the bubble and with conference tournaments. So I decided to give you guys one more update on this Sunday. Here's your bracket update and then some notes on the weekend, 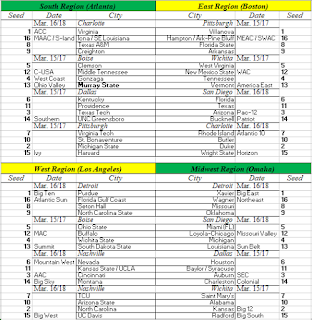 First off, congratulations to Murray State on claiming the first official ticket to the NCAA Tournament, after their 68-51 victory over Belmont in the Ohio Valley final. The Racers will enter the tournament with a 26-5 record and winners of 13 straight. They'll likely slot in as a No. 13 seed.

The main change on the bubble is USC, Washington and Louisville move out of the field and Kansas State, UCLA and Syracuse move in. Yes, I had USC among the last four byes, but a closer look at their profile reveals only one win against a team that could possibly make the NCAA Tournament even if they lose their conference tournament and that's Middle Tennessee. Utah and New Mexico State likely need the automatic bids in their respective leagues. The Trojans also lost at SMU and have an ugly home loss to Princeton, a team that didn't even qualify for the Ivy League tournament (which by the way, in now represented by Harvard in today's update, replacing Penn).

USC lost Saturday night to UCLA, giving the Bruins a season sweep of the Trojans to go along with big wins over Arizona and Kentucky. That win over Kentucky right before Christmas may end up being both an early and late Christmas present for the Bruins as that could very well help push UCLA in if they fare well enough in the Pac-12 tournament, where they are the No. 4 seed. USC is the No. 2 seed.

Syracuse moves in over Louisville. I favor the Orange's profile slightly more than the Cardinals'. Syracuse has wins over Clemson, Miami and Virginia Tech, while Louisville's best ACC wins were sweeping Virginia Tech, plus wins at Florida State and Notre Dame. But tipping the scales in Syracuse's favor are the better non-conference victories (Buffalo and Maryland for Syracuse, Southern Illinois, Memphis and Indiana for Louisville) as well as Syracuse winning at Louisville in their lone meeting of the season.

Syracuse just has to hope the committee doesn't ding them for finishing 11th in the standings, though we've seen conference standings aren't a major factor in tournament selection. Both have a chance to pick up a big win early in the tournament. A Syracuse victory over Wake Forest sets them up against North Carolina, while Louisville opens against Florida State, with Virginia awaiting the winner.

Back in the Pac-12, Washington dropped one at home to Oregon, which saw their RPI dip into the 60s. Now, Kansas State also is in the 60s, but they do not have a bad loss, while Washington now has two quadrant three losses, including one at Oregon State, though the Stanford home loss is just outside quadrant two. The Huskies are the No. 7 seed in the Pac-12, setting up a possible bubbly quarterfinal against USC.

Four championship games tip off today. In the Atlantic Sun, it's Florida Gulf Coast against Lipscomb. The two teams split their regular season meetings, with the home team winning both times. That's good news for Dunk City, as they will host the final.

With Liberty upsetting UNC Asheville, Radford will get to host the Big South championship later today. The Highlanders took both meetings against Liberty.

Arch Madness will crown a new champion today as top seed Loyola-Chicago goes up against Illinois State. The Ramblers come in with a 26-5 record and a top-30 RPI. They did also win at Florida in the regular season. They'd be an interesting at-large case should they lose. They did sweep the Redbirds during the regular season. Illinois State returns to the final after losing to Wichita State last season and being one of the first four teams out of the NCAA Tournament, resulting in a No. 1 seed in the NIT, a run that ended in the second round at the hands of UCF.

And in the Big Ten, it will be Purdue taking on Michigan. The Boilermakers can make a claim for a No. 1 seed with a win. In fact, they are currently sitting as the last No. 1 seed after Kansas was swept by Oklahoma State. Purdue went 2-0 against the Wolverines.

Here's a rundown of the rest of the tournament action today.

Today also marks the end of the regular season in the American Athletic, including a marquee showdown between Cincinnati and Wichita State in Wichita, where the winner will be the No. 1 seed in the AAC tournament. Elsewhere, Houston looks to improve their seeding case against Connecticut and Temple tries to keep their hopes alive as they visit Tulsa.
Posted by Bill_Riccette at 8:42 AM