The NCAA Tournament has been announced. I am happy to say I did extremely well this season. In fact, this season marked my best performance ever. I correctly selected 67 or 68 teams. Syracuse got in over Baylor, which isn't too bad because Syracuse wound up my first team out after Davidson claimed the automatic bid from the Atlantic 10. I correctly seeded 47 teams and had 64 teams seeded within one line. The remaining three teams I had in the field I only missed by two, which I believe is the first time I had every team I selected within two lines. St. Bonaventure, surprisingly in my opinion, landed in Dayton for the First Four against UCLA (the other at-large First Four will be Arizona State vs. Syracuse). I also missed Alabama, Creighton and Providence by two lines.

Here is my final bracket (top) along with the actual bracket (bottom) so you can see first-hand how I saw the teams compared to the committee. 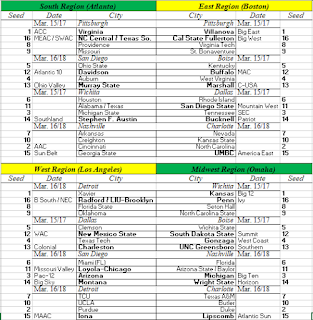 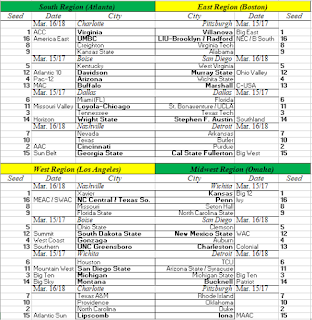 Pretty neat to also see some of the matchups I correctly nailed, including the entire top quadrant in the Midwest Region (Kansas vs. Penn, Seton Hall vs. NC State). Others include Cincinnati vs. Georgia State and Miami vs. Loyola-Chicago.

Let's talk about the teams that did not make the tournament, and try to understand why they missed out. Let's start with the team that now boasts the highest RPI ever for a Power 5 team to miss the tournament in the 68-team era, the USC Trojans.

Plain and simple, USC didn't beat any surefire NCAA Tournament teams. Their best wins were Middle Tennessee and New Mexico State. And if New Mexico State didn't win the WAC, USC would have had zero wins against tournament teams. Finishing second in the conference means nothing to the committee, especially when it's clear they didn't value the Pac-12 much. Only three teams made the tournament and two of them have to play in Dayton in the First Four. The meat just wasn't there for the Trojans.

Louisville also finished with a top-40 RPI and was left in the dust. But their issue was not beating any team in the top 50 of the RPI. Their best win was over a Florida State team that was given a No. 8 seed. Louisville went 5-13 against RPI groups one and two and their best non-conference win was against Southern Illinois, who barely made the top 100. They also lost at home to Syracuse, which certainly gave the edge to the Orange coming down the homestretch.

Middle Tennessee became the latest mid-major to be shut out from the at-large party. They weren't even among the first four out. But unfortunately, they didn't win the games they needed to. They had shots against Auburn, Miami and USC, but struck out. The dagger was the loss to Southern Miss in the Conference USA quarterfinals.

But the mid-major probably stinging even more is Saint Mary's. The Gaels went 28-5, but 24 of those wins came against RPI groups three and four. They did win at Gonzaga, but the committee felt that wasn't enough to push them through. Also didn't help that they lost to San Francisco and Washington State.

As it turned out, Notre Dame was knocked out of the tournament by Davidson. The Wildcats also sent UCLA to Dayton for the First Four. The Irish ended up closer to the field than I thought. They did beat Wichita State in the Maui Invitational, but that was one of just two quadrant one wins for Notre Dame. And you can maybe make an argument about Notre Dame having an RPI rank of 70, but Arizona State finished at No. 66 in RPI, the lowest-ranked RPI team to receive an at-large bid. So if it's any consolation for me, I still would've had 67 of 68 regardless of whether Davidson won or not, since I would not have had Notre Dame in, either way.

In any event, with this bubble, I am quite pleased with how everything turned out. I'll be filling out my bracket at some point when I actually get to sit down and take in the bracket. I hope you all enjoy the tournament and I want to thank you all for taking this journey with me again, in what was my seventh year in the Bracket Matrix and eighth year overall doing bracketology.

And speaking of the Bracket Matrix, the person behind the project does an absolutely fantastic job building the matrix. It's a crazy job tracking over 100 brackets online, but the project does a wonderful job of doing so. So go check the Matrix out. And who knows, my score of 360 may very well be among the highest scores! I'm pretty sure I'm right up there with Joe Lunardi again (he seeded 64 teams within one line, but also missed Syracuse and Arizona State). Nonetheless, I'm proud to again be among the higher end of bracketologists.
Posted by Bill_Riccette at 5:02 PM