Welcome back to March! And what a way to kick the month off than with Virginia's epic win over Louisville on Thursday. Now we've reached the final regular season weekend of the season before all the big conference tournaments kick off next week, minus the Big Ten, which will crown their champion tomorrow. Let's take a look at the bracket and then look at some of the biggest games this weekend, including the first of the automatic bids handed out for the NCAA Tournament. 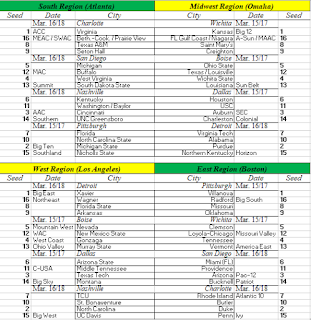 Saturday night will see the first ticket officially punched to the big dance, as the top two seeds in the Ohio Valley will square off. It's Murray State vs. Belmont in what has become the rivalry in the OVC. Both teams have the look of a No. 13 seed in the tournament.

Then on Sunday, four bids will be handed out from the Atlantic Sun, Big Ten, Big South and Missouri Valley. Two of those games are set. Florida Gulf Coast will host Lipscomb for the A-Sun title, while Radford and Liberty square off in the Big South.

Today's Big Ten semifinals will feature Michigan State against Michigan and Purdue against the Cinderella of the Big Ten, No. 7 seed Penn State, coming off their upset of No. 2 Ohio State. A win over the Boilermakers would give the Nittany Lions serious consideration, with three victories over the Buckeyes and a fourth quadrant one win over Purdue. Losses to Wisconsin, Northwestern and Minnesota are dragging down their profile. But two more wins this weekend and there will be no questions.

And in the Missouri Valley, it's top seed Loyola-Chicago against Bradley and Southern Illinois against Illinois State.

Here's who the teams listed among our bubble groups will play this weekend.

As you can see, two games are huge, as they feature bubble teams against each other, as they jockey for position.

Stay tuned for bracket updates all week as tournament bids are handed out and the bubble continues to be fluid and ultimately shrink. Enjoy all the action.
Posted by Bill_Riccette at 10:38 AM