And There Were Two...Unbeaten Teams

Another week, another team falling from the ranks of the of the unbeaten. Duke (14-1) suffered their first loss of the season in Raleigh as the Blue Devils fell 87-75 to North Carolina State, leaving 15-0 Kentucky and 15-0 Virginia as the only remaining undefeated teams in Division 1. As such, the Wildcats and Cavaliers remain as the top two teams in today's bracket. Duke still sits at No. 3 thanks to their collection of wins and Villanova remains at No. 4. Wisconsin, Arizona, Gonzaga and Kansas sit on the No. 2 line.

NC State moved into the last spot in the bracket with their win. Now they just need to win some games away from home, as they are currently 0-3 in road/neutral games. But a solid RPI and strong non-conference rank are key right now for the Wolfpack. Joining them in Dayton at the moment are Syracuse, Michigan State and Indiana. Georgetown, BYU, SMU and Oklahoma State are right on the doorstep. 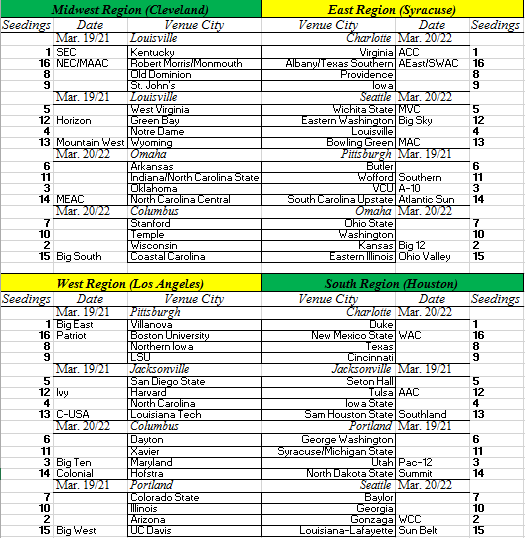 One piece of news that will affect the bubble, and that's the news that Syracuse freshman Chris McCullough, who averaged 9.3 points per game and about two blocks and two steals per game, suffered a torn ACL and is out for the rest of the season. Unfortunate for the Orange. We'll see in the coming weeks how this affects the team, but for now, they are in the field, hoping to continue to build on their 3-0 ACC start.

And as always, check out the Bracket Matrix. The guy is amazing with updating everything with so many brackets, so show him some love.
Posted by Bill_Riccette at 2:52 PM