Happy New Year, everyone. With the calendar flipped to 2015 and conference play underway, now is a good time to get back in the swing of things with tournament projections. It has been a crazy season so far, with upsets galore and some of the perennial top programs struggling and not even in our current projections (see: Michigan State and Florida). Because of this, some other teams not normally heard from have stepped up, including some towards the top of the bracket, namely Utah sitting as a No. 3 in today's projection and Seton Hall as a No. 6.

So without further ado, here is the first bracket of the 2015 calendar year. Kentucky, Virginia, Duke and Villanova are your first set of No. 1 seeds. 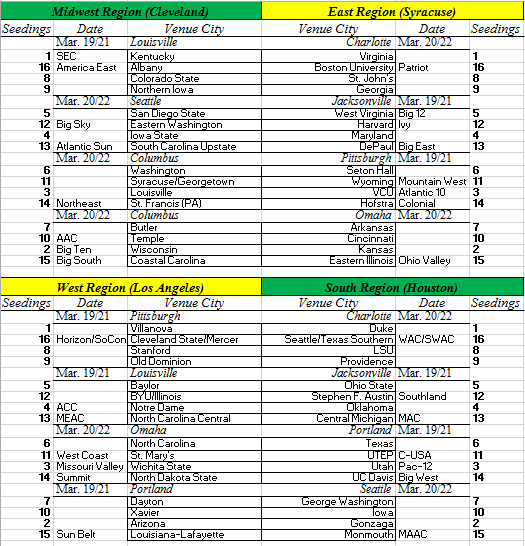 
Always remember, it's only January. This is very fluid and will absolutely change throughout the course of the next two months. And for those new to this blog, welcome, glad to have you on board, and note that I do projections based on a "if the season ended today" perspective. I use the current RPI rankings (I know, I know, the RPI is so out-dated, but it still is more or less the bible for the NCAA Selection Committee so we have to use it) and other current computer numbers to build the seed list and consequently, the bracket. This is also why you'll see a team like DePaul in the bracket, as they are the only 3-0 team in the Big East, therefore they are currently in the automatic qualifier. This is a good way to show you how bids can be stolen and the at-large field can shrink quickly.

I decided on Villanova as the last No. 1 over Wisconsin due to their collection of wins. The neutral-court win over VCU is one of five wins the Wildcats currently have over the RPI top-50, compared to three for the Badgers. Plus, VCU is currently in the top five of the RPI, making the win look even better. Of course, VCU's RPI is helped largely by the fact that they played the toughest non-conference schedule in the nation. But as mentioned before, RPI is still important in this process, so that is a big boost for Jay Wright's club.

As for the bubble, teams like BYU and Georgetown got the nod thanks to their respective non-conference schedules. If you've followed past selections closely, you'll notice teams that schedule tough non-conference schedules are generally rewarded for doing so, while those with weak schedules are typically punished (see: 2014 SMU). Syracuse got off to a slow start but picked up a nice win over Georgia Tech on the road to start 2-0 in ACC play. They also have a road win over Iowa to help their cause. They'll need to do some more damage in conference play, but at least Jim Boeheim's club looks like they might be starting to right the ship.

A lot of ball left to be played and we will continue to update the bracket throughout here in the Corral. And yes, I am once again a part of the Bracket Matrix. For those who are new, the Matrix compares bracketologists from across the country and after the tournament field is announced, determines who was the most accurate and also ranks everyone based on how well they projected the field. It's also a nice way to see many other bracket thoughts. And yes, the big boys Joe Lunardi of ESPN and Jerry Palm of CBS (the two guys who basically inspired me to begin projecting brackets five years ago) are a part of this bracket, as well as my good friends Chris Dobbertean of SB Nation and Dave Ommen of Bracketville.

Until next time, take care everyone. We'll be back for more bracket fun.
Posted by Bill_Riccette at 5:54 PM