I'd like to start this post by sending my congratulations to Duke head coach Mike Krzyzewski on reaching 1,000 career wins after Duke's 77-68 win over St. John's Sunday. The historic win may not have come at Cameron Indoor Arena, but it's still a very nice consolation prize to do so at Madison Square Garden. Coach K now joins Pat Summitt as the only coaches in Men's or Women's College Basketball to win 1,000 games (Summitt ended her career with 1,098 career victories).

As for the bracket, Duke is just below the top line today as Kentucky, Virginia, Gonzaga and Kansas make up the No. 1 seeds. Kansas gets the edge thanks to a 7-2 record against the RPI top-50 versus 5-2 for Duke, as well as having the No. 1 RPI and No. 2 non-conference strength of schedule.

More on the field after we take a look at the full bracket. (Note: Link to Bracket Matrix) 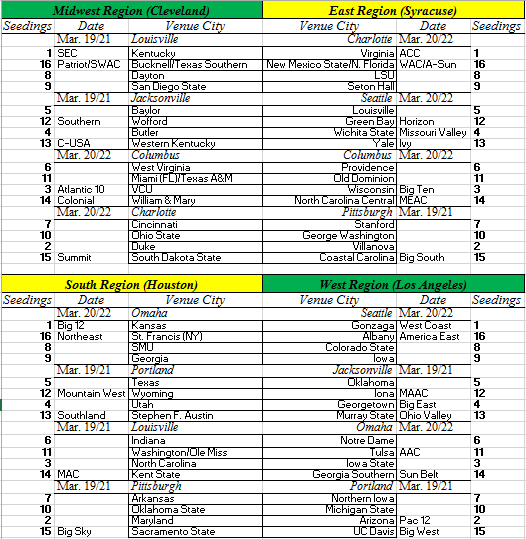 Thanks to their recent runs, Miami (FL), Texas A&M and Ole Miss move into the bracket, currently slotted in the First Four, joined by a slipping Washington team. Solid RPIs, good wins and good records away from home helped give the Hurricanes, Aggies and Rebels the last few spots in the field. St. John's, Xavier, North Carolina State and Illinois are the first four out.

The Red Storm have struggled a bit since conference play started, sitting at 2-4 with pretty much just the Providence win to hang their hat on, as St. Mary's is barely in the top 50. Xavier does have three top-50 wins, but they also have three losses outside the top 100, including two against non-conference opponents (UTEP and Auburn). The Musketeers also have an ugly 2-7 record away from home. A poor record away from home is also what's keeping NC State out, as they are just 1-4 away from Raleigh. Add that to a 1-7 record against the top-50 and Mark Gottfried is on the outside looking in. Can they sneak in just like last season?

I'll post again on Friday as I will begin posting twice a week up until Championship Week, where as always, I will post each day leading up to Selection Sunday. So buckle up. The Road to the Final Four is underway with less than two months to Selection Sunday.
Posted by Bill_Riccette at 9:36 AM