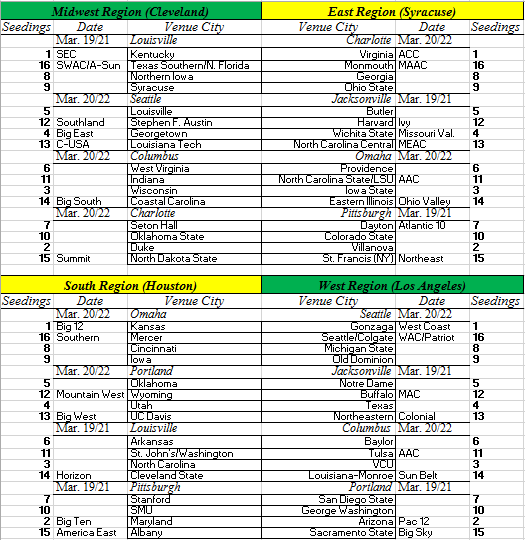 A new team sits behind the two current kings and a little bit of bubble talk. We'll discuss that after we take a look at the full bracket.

One of those changes is Gonzaga moving up to the top line, thanks to their play so far and other top-seed contenders slipping a bit, namely Duke with their recent two-game losing streak and Villanova just getting whacked by Georgetown. The Zags are third on the seed list, behind Kentucky and Virginia. Kansas (No. 2 in the RPI and having the No. 2 non-conference strength of schedule) rounds out the group of No. 1 seeds in today's bracket.

The debate between Kentucky and Virginia for the overall No. 1 seed is getting a bit interesting. As of today, they both sit at 17-0 and are among the top three in RPI (Kentucky is No. 1, Virginia is No. 3). Both have a top-15 non-conference strength of schedule, according to live-rpi.com. The Wildcats are 5-0 away from Lexington while the Cavaliers are 8-0 away from Charlottesville. Both are 10-0 against the RPI Top 100. But the main kicker tilting the arrow in Kentucky's favor is that nine of their wins are against the top 50 while Virginia only has five.

However, Buffalo, Ole Miss and Alabama are just inside the top 50, so those nine wins can quickly become just six for Kentucky.

Both have a very nice collection of wins at the top. Kentucky has the 32-point blowout win over Kansas back in November at the Champions Classic, while Virginia posted a 17-point win at VCU (who is No. 4 in the RPI). Virginia also has a road non-conference victory over Maryland on December 3 at the Big Ten/ACC Challenge and a home win against George Washington. Kentucky won at Louisville and scored home wins against North Carolina, Texas and Providence.

So as you can see, it's a close race right now. And there is still plenty of time left. Of course, this could all be a moot point because these teams aren't really competing for the same region. Cleveland is the closer region for Kentucky and the Cavaliers would likely be slotted in Syracuse. But it's still something to keep an eye on as we head towards February and, eventually, March.

As for the other side of the bracket, a team that is interesting to evaluate is SMU. They are 0-4 against the top 50, but after taking a closer look at their resume, they have very good computer numbers with an RPI rating of 19th and having played the 20th-best non-conference schedule. This after their non-conference schedule last season kept them out of the field. They don't have any signature wins yet but they are 5-4 against the top 100, including a win over Temple. And they don't have any bad losses, either, which is important. Let's see if they can pick up a key win, or at least, stay the course.

Defending champion Connecticut is currently on the outside at 9-7. They do have a neutral-court win over Dayton, but they are just 3-7 against the top 100 and sit 69th in the RPI. If they can pick up a few more good wins, which are hard to come by in the AAC, they can sneak back in. They still have another game against Cincinnati, whom they've already defeated, a game against a good Tulsa team and two games against fellow AAC-bubble team SMU. Win those and do well in the conference tournament and Kevin Ollie's team may get a chance to defend their title.

Friendly reminder to check out the Bracket Matrix and support the great work done there.
Posted by Bill_Riccette at 3:24 PM