We are just 23 days away from Selection Sunday. We are also gearing up for the final week of February and inching closer to Championship Week, where almost anything can happen. Let's check out where we stand. 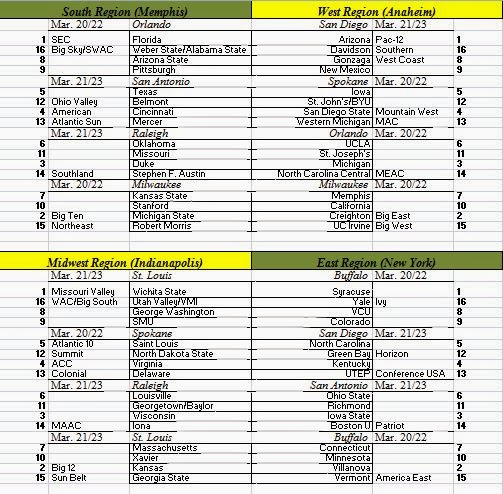 
Thursday saw two key results for the bracket. North Carolina defeated Duke at Chapel Hill and have moved up into line five, very close to a protected seed. That makes six wins in the top 50 for the Heels, as they have also defeated Michigan State (in East Lansing), Louisville, Kentucky, Pittsburgh and Richmond. Those wins easily outweigh the losses to Wake Forest, Miami (FL) and UAB.

The other key result from Thursday was BYU defeating Gonzaga. The Cougars now have a home win over Gonzaga, a neutral-court win over Texas and a win at Stanford. Despite the four losses outside the top-100, BYU's computer numbers are outstanding. They have a top-40 RPI and their out-of-conference schedule ranks sixth. That win, coupled with other results and the play of other bubble teams, puts the Cougars as the last team in the field today. More on the bubble in a bit.

Wednesday saw Syracuse's magic in close games run out for the time being, as they were defeated at home by Boston College. That's 6-19, RPI No. 172 Boston College. That loss dropped the Orange to No. 3 on the seed list, but based on the quartet of teams on the top line, it does not affect the region the Orange play in. They still head the East region.

Florida squeaked by Auburn, but their play of late compared to that of Arizona (particularly since the Brandon Ashley injury) has put the Gators as the new overall No. 1 seed with Arizona at No. 2. Again, it doesn't mean too much, region-wise, since these teams aren't competing for the same region. Wichita State remains the fourth No. 1 seed.

On the other side of the bracket, Minnesota, St. Joseph's, Missouri and Richmond are the last four byes avoiding Dayton, while Georgetown, Baylor, St. John's and BYU are the last four in and would open in Dayton. Tennessee, Providence, Dayton and West Virginia are the first four out, followed by Oklahoma State, Southern Miss, Harvard and LSU. Note: Harvard is tied with Yale at 7-1 in the Ivy League, but Yale owns the head-to-head tiebreaker.

As for games to watch this weekend, tonight features two Atlantic 10 teams very close in the bracket. VCU, currently an eight-seed, visits Massachusetts, currently a seven-seed. Also, the aforementioned Harvard visits Penn, while Yale is at Cornell.

Tomorrow sees the rematch of the overtime thriller a few weeks ago at the Carrier Dome, as Syracuse visits Cameron Indoor to take on Duke. Other key games include the first meeting of the season between San Diego State and New Mexico; St. John's has a great opportunity at Villanova, LSU visits Kentucky; Minnesota at Ohio State; Baylor at West Virginia; Dayton at Duquesne; Fordham at St. Joseph's; Kansas State at Oklahoma; UTEP at Southern Miss; Harvard at Princeton; Tennessee at Texas A&M; and Marcus Smart's return to Oklahoma State against Texas Tech.

And for Sunday: Michigan State visits Michigan, SMU tries to score a quality win away from home against Connecticut, Yale is at Columbia, and Providence is at Butler, Arizona State visits Utah, California hosts USC and Oregon welcomes Washington State.

Enjoy the weekend and I will see you on Monday. Remember, check out the Bracket Matrix to see how I compare with the others.