Another wild weekend of college hoops was overshadowed by Jim Boeheim's infamous explosion after C.J. Fair was called for a charge late in their game against Duke on Saturday. A close call, to say the least, but boy, was the reaction epic.

For those who missed the play, or want to see it again, here you go.


Now on to the bracket. 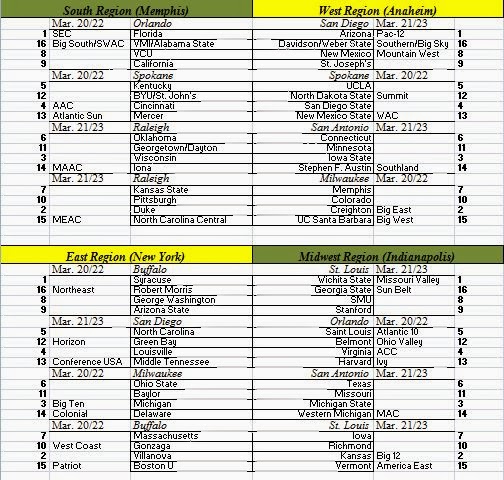 Even without the Boeheim deal, Syracuse has slipped in the last two games, but their overall resume keeps them on the top line. But Kansas and Villanova are breathing down its neck.

Florida is now the top overall seed, but can easily be overtaken by Arizona. And Wichita State cannot be counted out if they happen to run the table.

Georgetown's win over Xavier kept them in the field, despite the low RPI. The wins over VCU, Kansas State and Michigan State still look nice, but are losing a tad bit of luster. Xavier is now hanging their hat on a neutral-court win over Cincinnati, so they need to do some damage in the Big East tournament. An extremely huge game looms Tuesday night at St. John's (7:00 PM, Fox Sports 1).

Dayton climbs back into the field, giving the Atlantic 10 seven bids as of today. I don't think anyone expected the A-10 to potentially lead all leagues in tournament bids, but it very well can happen. Dayton can move closer to a bid by winning at St. Joseph's tomorrow.

Marcus Smart returned for Oklahoma State, who now sits just outside the bubble. They are 5-9 in conference play, but if they can score wins against two of Kansas, Kansas State and Iowa State, they're in. Lose two of them, and they're playing with fire. Would the committee take a 7-11 conference team? With the wins they have, it would make for a very interesting debate.

With just 20 days until Selection Sunday, and some conference tournaments beginning next week (Patriot League tournament begins one week from today), it's crunch time. Teams must make their move now, or be relegated to the NIT.

Just a few more bracket updates before we start actually putting teams into the field. I'll see you guys Wednesday.
Posted by Bill_Riccette at 10:53 AM