Hopefully everyone enjoyed their Valentine's Day weekend, whether you are single or not.

There was plenty of movement throughout the bracket, including near the top, where Wisconsin climbed to No. 7 on the seed list after their win at Michigan on Sunday. And despite the loss to Nebraska, Michigan State remains on the two-line, but sit at No. 8.

Down at the bubble, Missouri won a key game at Tennessee. Both teams join Providence and Richmond among the last four teams in the field today. On the other side, St. John's scored a huge win against Georgetown and now have only Baylor, Dayton and Richmond to pass to get into the field. West Virginia is also among the first four out.

Speaking of Baylor, they take on Oklahoma State tonight in Waco, in what amounts to an elimination game. Both teams are 4-8 in conference play, so tonight's loser can do no better than 9-9 to finish Big 12 play. Even if tonight's loser runs the table and gets to 9-9, it may not be enough. Marcus Smart is still out for the Cowboys, so Baylor has a huge chance at home.

Also watch Florida State tonight against North Carolina. The Seminoles have really faltered of late, sitting just 15-10 with an RPI rating of 61. They do have neutral-court wins over Massachusetts and VCU, but they are just 4-9 against the RPI top-100 and have lost to Clemson, Maryland and Miami this month and sit just 6-7 in ACC play. Tonight is a must-win for Florida State.

So after another thrilling weekend in basketball, which including No. 1 Syracuse nearly losing at home to NC State (a win that would have put the Wolfpack in today's field), let's see how the bracket shapes up. 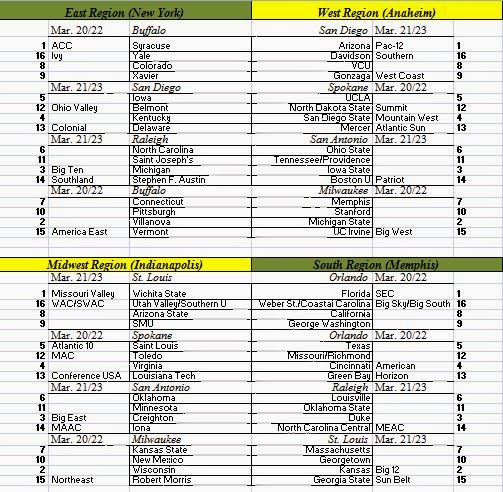 And as always, check out the Bracket Matrix (I am under the name "Wild), to compare me to the likes of ESPN's Joe Lunardi, CBS' Jerry Palm, and many, many others. See you guys next time.

Posted by Bill_Riccette at 9:48 AM