Tuesday night provided a lot of bubble action and saw some teams improve their standing while other lost their grip on tournament bids. 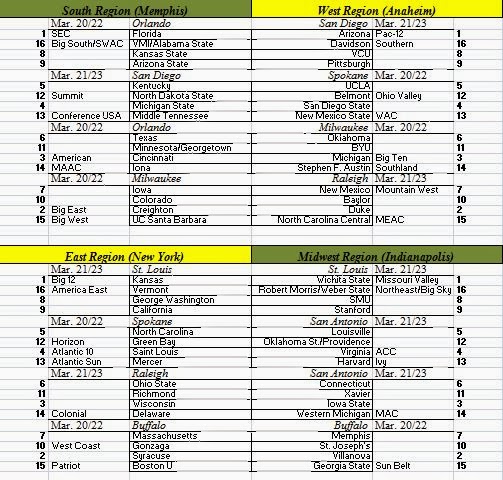 Minnesota defeated Iowa at home, giving them four top-50 wins. Despite the 7-9 conference record, the Gophers remain in the field. A lost would've been crushing, as it would have sent the team to 6-10 in conference play.

Xavier climbed back into the field by defeating St. John's on the road, which in turn, knocked the Johnnies out of today's update. That completes the season-sweep of the Red Storm for Xavier, who still gets Creighton and Villanova at home in their final three games. Steve Lavin's team does not have a quality opponent remaining, so they must win some games in the Big East tournament, which lucky for them, is on their home court.

Dayton got crushed by St. Joseph's, dropping them from the field, as well. Moving into their place was Oklahoma State. Even with the 6-9 Big 12 record, they still have good wins are clearly a much better team with Marcus Smart then without him. Their last three games are very key. Dayton has work to do in the Atlantic 10 tournament.

Missouri is making it very difficult for the committee to send a third SEC team after they were swept by Georgia. The Bulldogs are 10-5 in conference, but haven't beaten the top dogs. That's thanks to the unbalance of the SEC schedule. The Tigers are now on the outside looking in, really hanging their hat on their home win against UCLA back in December. At this point, it may not be enough, thanks to their play of late.

That's your update for Wednesday. I will see you guys Friday to set up for the next-to-last weekend of the regular season.
Posted by Bill_Riccette at 5:27 AM