One of the best months of the sports year begins tomorrow. We are set to leave behind February and enter the madness that is March.

We stand today just 16 days away from Selection Sunday and the battle for the final few spots in the field is as fierce as ever. Unfortunately, the bubble got a lot muddier throughout the week. Teams like Georgetown, Richmond, Nebraska, and St. John's all lost, meaning a lot of shuffling happened at the bottom of the bracket.

On the other hand, Xavier and Minnesota were among the teams scoring key victories to help their tournament chances. Xavier won at St. John's and the Gophers defeated Iowa.

Oregon also defeated UCLA Thursday night—despite two UCLA players being suspended—to score their second top-50 victory of the season. And with very strong computer numbers (RPI 32, NC SOS 59 with a 12-0 record), that's currently enough to put the Ducks back in the field. They still have some work to do in the Pac-12 tournament, but this is certainly a start.

The biggest winner of the week? We head down to Fayetteville for that answer. Arkansas won at Kentucky to score a season-sweep of John Calipari's team. The Razorbacks now have four top-50 victories, including two away from home—the aforementioned Kentucky win and a win over Minnesota out in Maui.

As for the rest of the field... 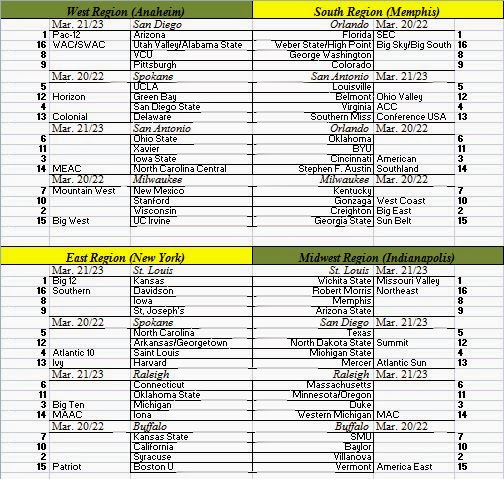 This weekend is shaping up to be a wild one. Huge bubble implications, plus Wichita State goes for undefeated regular season tomorrow against Missouri State.

Enjoy the weekend and I will see you all Monday to start setting up the conference tournaments.

Posted by Bill_Riccette at 6:28 AM