Welcome to March and welcome to the start of conference tournaments.

Indeed, tonight features the first round of the Patriot League tournament as No. 10 Navy takes on No. 7 Colgate and No. 8 Loyola (MD) hosts No. 9 Lafayette.

Before we move forward, let's take a look at the bracket and a quick look back at that weekend that was. 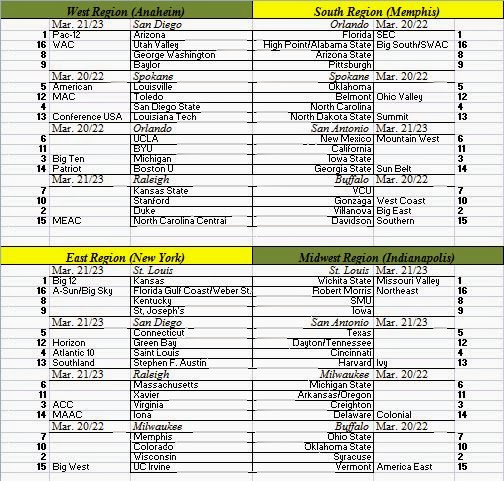 Note: To explain Louisiana Tech as current AQ of Conference USA, there is currently a four-way tie atop the standings (Southern Mississippi, Louisiana Tech, Middle Tennessee and Tulsa). Louisiana Tech and Tulsa are both 2-1 in games amongst the group, as each team has played the other three one.

The tiebreak for Tech and Tulsa is that Tech defeated Tulsa head-to-head, therefore, they are in the field. Should another team end up as the No. 1 seed if these four all stay tied, which is possible, then that team will enter the bracket.


Dayton scored a much-needed victory on Saturday over Massachusetts, giving them four top-50 wins, including neutral-court victories over Gonzaga and California, as well as a home win over George Washington. The Flyers have good computer numbers and a top-50 RPI. For the time being, the Flyers are in the field as one of the last four in, meaning they would play on their home court to begin the tournament.

Arkansas did exactly what they needed to after beating Kentucky by avoiding the letdown loss to Georgia. The Razorbacks are still among the last four in, but have a little breathing room. Xavier also picked up a key victory over Creighton to move closer to a bid. The Musketeers look to be the No. 3 seed in the Big East tournament and can still pick up a quality victory before then if they can defeat Villanova this week.

The biggest loser of the weekend was probably Minnesota. They lost over the weekend at Michigan and looking over their resume, it doesn't look at good as once thought. They are just 3-7 against the top 50, none of those wins coming away from home. In fact, they are 3-9 in games played away from Williams Arena. Two of those wins are against Penn State and Northwestern, both outside the top 100. The third came against Richmond. Moving into the field in their place is Tennessee.

Georgetown also fell out from Friday's bracket. Despite the wins, the Hoyas are just 7-9 in the Big East and only 16-12 overall, which isn't exactly a great record for an at-large team. And their RPI is below 60 with a loss to RPI No. 224 Northeastern bringing them down. The Hoyas currently sit in the "Next Four Out" group.

Oklahoma State's victory over Kansas just about puts the Cowboys in the field. They can really solidify their spot with a win over either Kansas State or Iowa State. However, should they lose both, they will sit at 7-11 in Big 12 play, which would make a very interesting discussion when the committee gathers in Indianapolis next week. OSU is a ten-seed in today's bracket. The bigger story was the discussion of whether Kansas would fall to the two-line.

After considering Wisconsin, Syracuse, and to an extent, Duke, the choice was Kansas staying put as the final No. 1 seed, despite seven losses. Overall body of work shows that Kansas still has 12 victories versus the top 50, most in Division 1. They also have the second-best RPI and played the nations' toughest schedule, both overall and out of conference. That's why Kansas is still atop the East region today, behind Arizona, Florida and Wichita State.

As I mentioned in the beginning, I will start posting updates every day until March 16, letting you know what conference tournament games are taking place each day. Just two more weeks to get through, but they are two of the best weeks of the season. Hang on tight. It's full-speed ahead from now until Selection Sunday.

Posted by Bill_Riccette at 9:33 AM