Now we're finally seeing some movement in the bracket and we're also popping some bubbles. Illinois, Texas A&M and Old Dominion all lost yesterday and have pretty much taken themselves out of consideration for an at-large. Texas lost a heartbreaker to Iowa State after leading by as many as 16 in the first half, losing on a buzzer-beater by the Cyclones. However, the Longhorns remain in the field as the last team in. Miami missed an opportunity against Notre Dame and now with the RPI under 60, hard to think the Hurricanes get in. And Ole Miss lost a wild one against South Carolina, a loss that drops the Rebels into the Last Four In group.

With the dust settling, for now, let's see how the bracket shapes up heading into Selection Weekend. 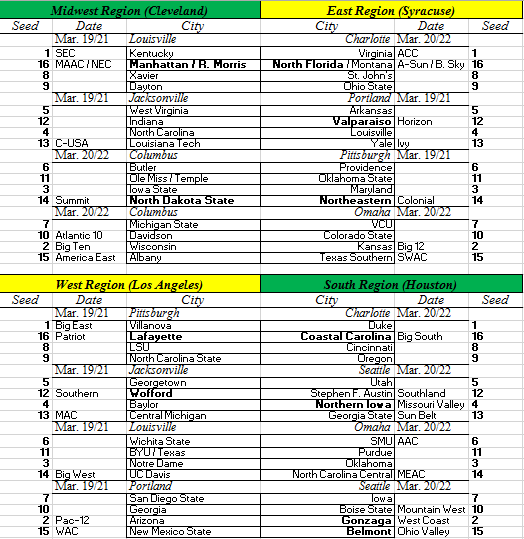 Let's take a look at what is on tap on this Friday the 13th. Will some teams get lucky?

More bubble action as Temple and Tulsa take the court hoping to do what Texas A&M couldn't, and that's avoid a bad loss in the conference tournament this close to Selection Sunday. Being among the First Four Out, Tulsa needs a win more than Temple, though the Owls certainly wouldn't hurt themselves by beating the Tigers.

If they both win today, the Cavaliers and Blue Devils should lock up No. 1 seeds, regardless of what happens elsewhere. Notre Dame hopes to stay on the 3-line while North Carolina has a chance to move up to the 3-line after their win over Louisville yesterday.

VCU escaped with a victory over Fordham yesterday and now gets a third crack at Richmond, as the Rams try to avoid the always-tricky 8/9 game in the NCAA Tournament. Davidson can pretty much secure their spot if they get past the Explorers. Rhode Island is quietly still on the bubble but likely needs to win the AQ to get in.

Last year's Big East tournament champs are back in the semifinals, only this time, they draw top seed Villanova. Last year, Seton Hall upset the top-seeded Wildcats. Marquette could not pull the same feat this year. I'm sure the Friars don't mind facing Villanova to get ready for the NCAAs. The other semifinal should be a good one also. Both teams won close games yesterday, including Xavier winning in overtime against Butler.

These four teams all finished within one game of each other in the final regular season standings. Now they make up the Big Sky's final four. Unless Eastern Washington wins the AQ, the champion will likely be headed to Dayton on Tuesday or Wednesday.

With all the bubble action yesterday and a host of teams losing, Indiana did themselves a major favor by beating Northwestern. They're not quite safe yet, but they're in better shape than they were 24 hours ago. A win over the Terps would make the Hoosiers safe.

We're looking at four of the top 16 teams entering the NCAA Tournament, so seeding is on the line is these games. If Kansas wins this one, that should lock up a No. 2 seed. A loss and a Maryland Big Ten title, and we may see the Terps on the 2-line come Sunday. The other three teams jockeying for position along lines three and four.

Potential trap game for Louisiana Tech, as they basically play a road game against UAB, despite being the higher seed. With Old Dominion's loss, C-USA will once again be a one-bid league.

Central Michigan and Buffalo finally get to make their MAC Tournament debuts. Akron, however, is playing their fourth game in five days, in what has been a nice run for the Zips.

After their spicy-hot post-game press release, the Eagles hope to continue their hot streak against Delaware State.

More chalk here in the Pac-12 with a semi-bid thief lurking in UCLA. A win by the Bruins would move them ahead of Texas and into the tournament. A loss, and the Longhorns would stick around. Utah bounced back with their win over Stanford and Oregon solidified their tournament spot with the win over Colorado.

So we do end up getting Kentucky-Florida III here in the quarterfinals, in what has been a wild tournament so far. Auburn popped Texas A&M's bubble and South Carolina likely sent Ole Miss to the First Four, setting up a couple unlikely quarterfinal matchups. But it is good to see both Bruce Pearl and Frank Martin having some success again. Arkansas still has a chance at a protected seed. A loss to the Vols would put an end to those hopes.

All chalk in the Southland semis, which should make for a fun pair of games.

Interesting development here. Since Alabama State and Southern are both ineligible for the NCAA Tournament, so Prairie View vs. Texas Southern will actually decide which team wins the automatic bid from the SWAC.

After getting a bye in the quarters, the Aggies are back in action today as they enter play today the heavy favorites.
Posted by Bill_Riccette at 6:57 AM