The regular season is officially over and we are less than one week from beginning the annual ritual of dissecting one of the most famous brackets in sports.

Over the weekend, four teams officially claimed their spots in the field of 68. That quartet of teams included Belmont (Ohio Valley), Coastal Carolina (Big South), Northern Iowa (Missouri Valley) and North Florida (Atlantic Sun). As we begin Championship Week, three more bids will be handed out today in the Colonial, Southern and Metro Atlantic. Two other conferences kick off their tournaments. We'll take a look at today's schedule after a look at the bracket and a couple notes. (Bracket Matrix) 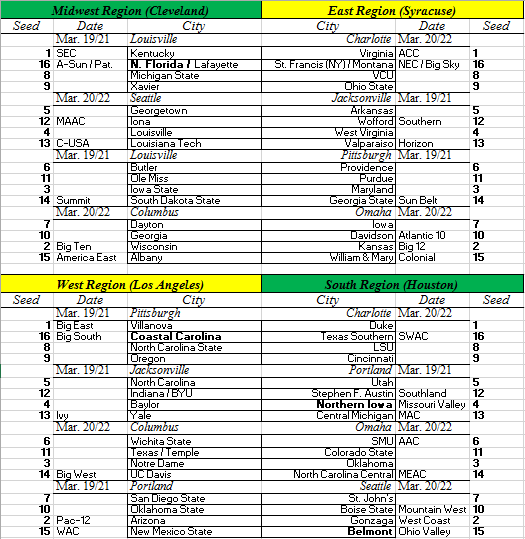 Seeding Note: Indiana/BYU moved down to a 12 seed and Texas/Temple moved up to an 11.

The main change from Friday is that Texas and Temple moved into the field as the last two at-larges, replacing Texas A&M and Illinois.

The Aggies were shorthanded, as an injury sidelined leading scorer Danuel House, and they fell by one point at home to Alabama. Even before this loss, A&M's resume and tournament hopes were getting shakier. Fortunately for A&M, LSU scored a huge win at Arkansas to move back into the RPI top 50, giving the Aggies two top-50 wins. But the Alabama loss, even without House, is rough and it may take a third win over the Bayou Bengals in the SEC Quarterfinals to get A&M in. Provided A&M gets past the winner of Mississippi State-Auburn first.

Illinois started strong against Purdue, getting off to a 15-2 run to begin. Then something clicked off for the Illini until the end of the game where they made it somewhat interesting. But losing their fire in the middle of the game, and ultimately losing the game, dropped Illinois out and slotted them as the No. 8 seed in the Big Ten tournament, opening against Michigan and landing in Wisconsin's quarterfinal bracket. It'll likely take a win over the Badgers to get the Illini back in, as their RPI is outside the top 60, not good this late in the game. Of course, Indiana sits at 58, so they're not exactly safe, either. But comparing the two, Indiana has a better RPI, better strength of schedule, better top-50 record, better top-100 record and a head-to-head victory. By the way, Indiana is No. 7 and draws Northwestern and a potential quarterfinal with Maryland.

So with that in mind, let's kick off Championship Week by taking a look at today's games, starting with the three championship games.

Northeastern is in the Colonial final for the second time in three seasons, losing to James Madison in 2013. The Huskies are looking to dance for the first time since 1991. William & Mary makes their second straight finals appearance after losing a heartbreaker last season to Delaware and surviving double overtime to defeat Hofstra in the semifinals. The Tribe have never played in the NCAA Tournament. These teams split their regular-season meetings, both winning on their home court. W&M won 78-62 on January 24 while the Huskies got revenge at home, 75-64, on February 18.

We have ourselves a nice little Cinderella story early as Furman, the No. 10 seed and bottom team in the standings, finds themselves in the finals after getting through The Citdel, Chattanooga and Mercer in the past three days. But to get to the NCAAs for the first time in 35 years, they have to beat the SoCon heavyweight in Wofford, a team that defeated NC State and Iona in non-conference play. The Terriers aim for the second-straight SoCon title. Wofford swept the Paladins during the regular season, winning 74-49 at home on Jan. 22 and 62-60 at Furman on the last day of February.

The old rivalry in the MAAC adds another chapter in the championship game, as the last two MAAC tournament champions meet here. Manhattan won last season, Iona in 2013. The Gaels were also the last at-large team in 2012. And with a top-50 RPI going into today, Iona may be considered for an at-large again if they happen to lose as they will have played a whopping 20 games away from home, winning 12 of them, including 11 true road games. But if they win, they'll potentially be a trendy upset pick as a No. 12 seed.


Two opening-round games get the MEAC tournament going, including the game to decide who gets a shot at regular-season champion North Carolina Central. The other two first round games take place tomorrow. Bethune won the only meeting during the regular season with Coppin State and it came on the road, while Hampton and Morgan State split their two games.

The MAC tournament kicks off with four games at campus sites. The winners today will head to Cleveland. The winners of the first pair of games and the second pair will meet to advance to the quarterfinals where Kent State and Toledo await. The top two seeds, Central Michigan and Buffalo, are off until the semifinals. The only matchup here that was split during the regular season was, not entirely surprisingly, the 8/9 game.

The top two seeds were off Sunday as they had won their quarterfinal games on Saturday, giving them a bit of rest going into these semifinal matchups. Both matchups were split during the regular season, so we could have some good games here to set up the championship final.

Gonzaga looks pretty firm as a No. 2 seed in the NCAAs at this point, unless a host of teams ahead of them lose in their conference tournaments. The second game is quite a big one for the bottom of the bracket. BYU has to avoid another bad loss here, as losing to a lowly Portland team before the final could wipe out the effect of the Gonzaga win and would begin the long, agonizing wait until 6:00 Sunday afternoon. Working in the favor of the top seeds is they both went 2-0 against their semifinal opponent, so we could be heading toward another Gonzaga-BYU final.

We'll be back tomorrow where one more tournament bid is up for grabs and some of the major conference tournaments begin. Enjoy the games today and take care.

Posted by Bill_Riccette at 8:09 AM