Three more teams punched their ticket to the NCAA Tournament, bringing our official total to seven teams. Wofford (Southern) and Manhattan (MAAC) won their respective conference titles for the second straight season while Northeastern (Colonial) is dancing for the first time since 1991. Today, four more bids will be earned in the Northeast, Horizon, Summit and West Coast.

Let's take a look at the bracket with the new teams and some minor changes are tweaking the seed list a bit last night. No new at-larges as BYU easily defeated Portland to advance to today's West Coast final against Gonzaga. 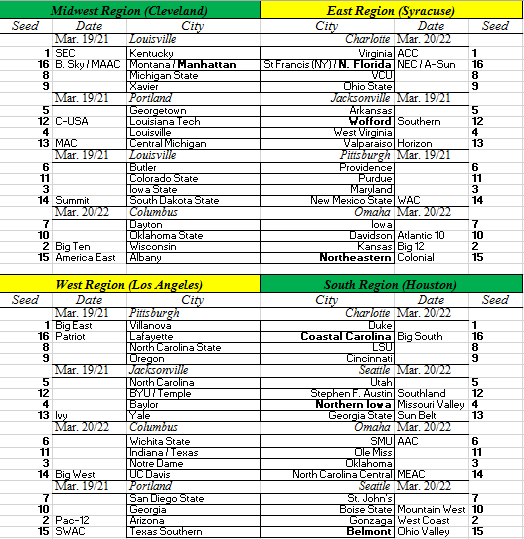 Now a look at today's action.

The Zags are likely locked into a No. 2 seed in the NCAA Tournament, unless some of the major tournaments get really wacky. BYU avoided the bad loss and if they don't get completely embarrassed tonight, their computer numbers and the win at Gonzaga a few weeks ago should help Dave Rose's team hear their name called on Sunday.

As the higher seed, the Crusaders get to host the Horizon final against a team they beat at home during the regular season, though the Phoenix won the pair's meeting up in Wisconsin, but only by one point. Winner likely slots in as a 13 seed, maybe a 12, in the big dance.

William & Mary failed to secure their first Tournament berth in school history last night and remain one of five original Division I schools to have never played in the NCAA Tournament. One of the other four? The Terriers of St. Francis (NY). Tonight is their chance to trim that infamous list to just four. Bobby Mo is back in the final after losing at home last year to Mount St. Mary's. The Colonials have not danced since 2010, though they have won in the first round of the NIT each of the last two seasons. Each team won on the other's home floor during the regular season.

After upsetting Oklahoma in last season's tournament, the Bison are back in the Summit final against a the school with one of my favorite nicknames in all of sports, the Jackrabbits of South Dakota State, who won this tournament in 2013. Both teams won at home in their two matchups.

ACC First Round (in Greensboro, NC)

Yes, the ACC Tournament now starts on a Tuesday and the championship will be Saturday, instead of Selection Sunday. Two opening games today where the winners will face No. 5 North Carolina and No. 6 Miami (FL), respectively.

I must apologize here, as I mixed up two of the games yesterday. I incorrectly said Coppin State/Bethune-Cookman was yesterday. It was not. It should have been No. 12 Savannah State vs. No. 5 Delaware State, a game won by DSU. Sorry for the confusion. These games today are correct.

SWAC First Round (in Houston, TX)

One opening round game in the 9-team SWAC tournament. Winner here gets a shot at No. 1 Texas Southern.

Also, a bit of love to the Ivy League, as they have the last regular season game of this season, as Princeton visits Penn tonight. As mentioned in a previous post, the one-game playoff between Harvard and Yale takes place at Penn on Saturday.

Buckle up because tonight is the last "light" night of games before things really get going tomorrow. A host of conferences kickoff their tournaments tomorrow and we have our last bid handed out before the busiest day of bid claiming on Saturday. Just five more days. Until tomorrow, take care and enjoy the games.
Posted by Bill_Riccette at 11:17 AM