Congratulations to the Lafayette Leopards for winning the Patriot League and securing their first Tournament berth since 2000. That gives us a dozen teams now officially in the field. The remaining 20 bids will be handed out over the weekend. But that doesn't mean the next two days won't be exciting. Bubble games galore will shape the bracket, with Selection Sunday just three days away. Let's take a look at bracket, though there was really no change other than giving Lafayette the bold letters as the Patriot's AQ, which means yesterday wasn't the last time with minor changes. Oops. And while you're at it, check out the Bracket Matrix as everyone is setting up for their final brackets. 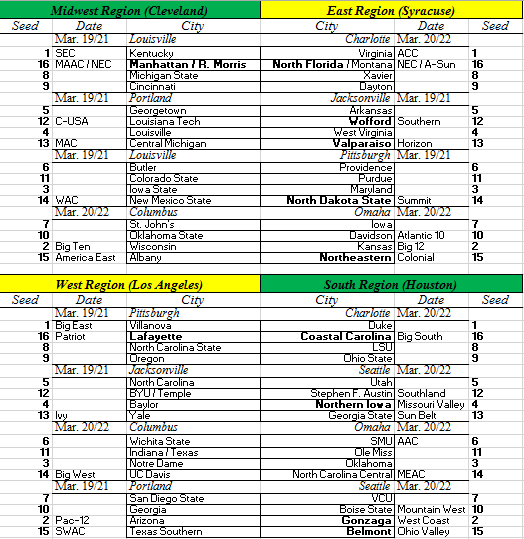 American First Round (in Hartford, CT)

After a disappointing regular season, the defending national champions find themselves playing in the opening round in Hartford. But these are essentially home games for UConn and if they can click this weekend, they can make a run to the AAC's auto-bid. If they get past USF, Cincinnati awaits in the quarters.

Miami has a big opportunity against Notre Dame. A win over the Irish would put the Hurricanes in the field. Everyone else playing today, with the exception of Florida State, are locks at this point.

Atlantic 10 Second Round (in Brooklyn, NY)

VCU tied with Richmond in the standings and was swept by the Spiders, which is why the Rams are playing today and the Spiders are off until tomorrow. The Rams are safely in the field, but have spiraled toward the middle of the bracket without Briante Weber. A run in Brooklyn should right the ship and help Shaka Smart get a better seed come Sunday.

The reigning Big East tournament champs begin their run against the same team they began last year's run with, the Red Storm. This time around, the Friars do not need the auto-bid to get and neither do the Johnnies, but the winner of this game could end up as a higher seed in the NCAA Tournament, especially if St. John's wins, as that would make them 3-0 against Providence this season.

If they both win today, Georgetown and Butler would meet for a fourth time in the semifinals. How is that possible, you ask? Well, these teams met in the Bahamas early in the season, plus the two conference meetings. How could two conference teams meet in an early-season tournament, you ask? Because Butler committed to this tournament before they committed to joining the Big East. By the way, the Bulldogs won in Bahamas, but the Hoyas took both conference games.

As the top seed in the Big Sky, the Grizzlies won the right to host the entire tournament, so they basically have to win three home games to win the AQ. On the other side of the bracket, Eastern Washington and Sacramento State could be set for a rubber match in the semifinals if they get past their quarterfinal opponents.

Two Big Ten bubble teams in action as Illinois and Indiana have to win to keep their tourney hopes alive, particularly the Illini, as a loss likely ends their hopes, while the Hoosiers have a tad more margin of error. That said, it would be wise of them not to lose to the Wildcats.

Texas, like Miami, avoided the bad loss yesterday and can also help their position with a win over Iowa State. A loss wouldn't immediately take the Longhorns out, but it would give other bubble teams plenty of time to overtake them.

What's interesting to me in this bracket is that Cal Poly is in the same seed as last year, when they made their Cinderella run to the Big West title with 19 losses. This year, they only have 15. Nonetheless, UC Davis has looked like the class of the conference this season, leading the league seemingly the entire season.

Louisiana Tech is once again the top seed in the C-USA field and last year's champion Tulsa is in the AAC. But they can't get too comfortable. A potential semifinal date with tournament host UAB awaits.

C-USA's bubble team sits on the other side of the bracket. ODU may have to win the auto-bid to get in. A loss here sends them to the NIT.

As mentioned before, Central Michigan and Buffalo received byes until the semifinals. Today we find out who will stand between them and a spot in the championship game.

North Carolina Central took care of business in yesterday's portion of the quarterfinals. Today, the remaining four quarterfinalists meet to decide the rest of the MEAC's final four.

The Broncos are the No. 1 seed, which is huge for their at-large hopes. But a loss to the Falcons would really make them sweat Sunday and take some shine off of their sweep of San Diego State. Speaking of the Aztecs, they meet UNLV in Vegas for the second time in eight days, though this time, SDSU gets to wear their home whites. And the Bulldogs of Fresno have been tricky this season, so Colorado State has to be careful not to overlook them.

As a team sitting outside the field, a loss to the bottom team in the standings would cripple UCLA's chances. And the Trojans are feeling pretty good after erasing a 10-point halftime deficit against Arizona State. Utah hopes to right the ship and get back into protected-seed range, while the Ducks look to solidify their spot in the field. Stanford absolutely must beat Utah to even get back in the conversation. Otherwise, it's off to the NIT.

SEC Second Round (in Nashville, TN)

Florida as the No. 8 seed in the SEC is very unusual. Something else unusual that we might see is Florida vs. Kentucky in the quarterfinals. It feels like those two always meet in the SEC finals. Not this year. That's if the Gators roll the Tide.

A&M enters the day as the first team out of the tournament. A loss to the Tigers, and they're out for good. Ole Miss looks like they're in, but if they can't get past the Gamecocks, they may find themselves opening the tournament in Dayton.

Corpus Christi is a sneaky team here. They were the only team in conference play to defeat top seed Stephen F. Austin. And the Lumberjacks are on the opposite side of the bracket.

Early-round action in New Orleans to decide the opponents for Louisiana-Lafayette and Louisiana-Monroe in tomorrow's quarterfinals.

Bottom line, it would be a major upset if anyone other than New Mexico State, who has a bye to tomorrow's semifinals, wins this tournament.
Posted by Bill_Riccette at 8:47 AM