This is why we love March. What a wild day Friday was that saw shuffling in the bracket literally from top to bottom. Both top-seed contenders in the ACC lost yesterday, opening the door for Wisconsin to move up to the top line. In fact, I have moved the Badgers to the top line for now and they will stay on the top line if they win the Big Ten.

Of the two ACC teams, Duke actually stays on the top line with the better resume. Better RPI, better road wins and a head-to-head win over Virginia. While the ACC title does look nice for Virginia, i'm sure the Committee will take a look at the fact that the ACC uses unbalanced scheduling, so some teams may play some teams twice that others see once or one gets to play at home and other has to go on the road against a certain team. Nonetheless, at this point I think Duke still has a chance for a No. 1 seed while Virginia may need Wisconsin to lose either today or tomorrow.

And as for Arizona? The wins are obviously nice, but it's hard to put a team that lost to Arizona State, UNLV and Oregon State on the top line, even if the Wildcats win the Pac-12 Tournament. The other five teams all have one loss combined against a team outside the top 100 and that's Wisconsin against Rutgers.

Down in bubble land, we had yet another team fail to improve their stock much as UCLA could not hold off Arizona. Now, while the Bruins do have a top-50 RPI and a non-conference schedule that ranks near the top 50, their record away from home looks really bad, at just 4-11 and two of those wins came against the Pac-12's bottom team, USC, while a third was against UAB, though to UCLA's credit, the Blazers did just knock out the top seed in Conference USA. But with a road record that bad and their best non-conference wins being against Long Beach State, it's hard at this point to see the Bruins getting in.

A bubble team that is still hanging around, however, is Tulsa. Now, while they are playing in the AAC semis today, it would've been of more value to them to beat Cincinnati rather than Connecticut. Nonetheless, this is still a game Tulsa needs to win to stay alive, but at this point, they may just have to win the AQ.

Other potential bid thieves also lurk in the Atlantic 10 and Mountain West and we'll get to those as we look at the games today.

Speaking of today, this is the day 14 automatic bids are handed out. Remember, the SWAC's AQ was already handed out as Southern is ineligible, but the Ivy has their one-game playoff today, so it makes up the difference. 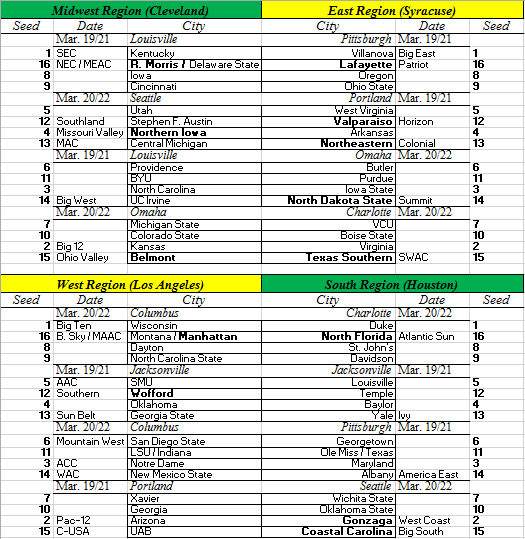 Is this finally the year Stony Brook breaks through and plays in the NCAA Tournament? This is the fourth finals appearance for the Seawolves in five years. Of course, Albany is no pushover, having won the America East each of the last two seasons, including winning at Stony Brook last season.

The most-likely bid thief is still lurking as Ryan Boatright did his best Kemba Walker/Shabazz Napier impression, hitting a buzzer-beating three to sink Cincinnati. This guarantees bubble teams will be sweating on Sunday, with either the Huskies or Hurricane playing for the auto bid. On the other side, I think Temple is probably in at this point and would become a lock if they beat the Mustangs.

In a wild night of ACC semifinal action, we get the Heels and Irish, who took out the top two seeds Virginia and Duke. Both teams in good position to get a No. 3 seed now in the big dance.

Davidson had an epic last-season victory over La Salle while VCU finally rid themselves of the Spiders. Rhode Island is hoping to make the A10 a four-bid league, and it'll likely take the AQ to do so.

It's been quite a run for Xavier in this Big East tournament. But now they face a Villanova team that can possibly lock up a No. 1 seed in the NCAA Tournament with a win.

The Grizzlies get to play for a conference championship in front of their home crowd and would likely head to Dayton if they win. Eastern Washington, however, could end up as a 14 seed if they win.

Purdue looks to be in at this point, as a loss to Wisconsin, based on the Boilermakers' position, wouldn't tumble them completely out. On the other side, Maryland looks to go 3-0 against Sparty this season in hopes of reaching the Big Ten championship in their first year as a member of the conference.

That was quite a way for Iowa State to win last night after Oklahoma missed a wide-open layup at the buzzer that would have sent the game to overtime. Nonetheless, we get the rubber match between the Cyclones and the Jayhawks.

Another conference where the top two seeds fell in the semifinals. After missing out on the NCAA Tournament last season as the Big West's top seed, UC Irvine gets a reprieve and has a chance to play in their first NCAA Tournament. The Rainbow Warriors have not danced since 2002.

After both teams won as the lower seed yesterday, including UAB's overtime win over No. 1 Louisiana Tech, the Blue Raiders and Blazers meet on UAB's floor to decide the C-USA champion. Winner likely receives a 15 seed to the dance.

After a heartbreaking loss last Saturday at Dartmouth that would have won the Ivy League, Yale now has to face Harvard a third time in a one-game playoff to decide which team gets the automatic bid. This is the first one-game playoff for the Ivy since Princeton beat Harvard at Yale in 2011.

The rest seemed to help the Bulls and Chippewas, as they both won their MAC opener and now meet to decide the MAC auto-bid.

Delaware State pulled the big upset, knocking off North Carolina Central and sending them to the NIT. And with Hampton defeating No. 2 Norfolk State, the winner here will have a direct flight to Dayton for the First Four.

Bubble teams have yet another reason to worry as Vegas also provides a bid thief in their championship after the Cowboys needed overtime to gallop past the top-seeded Broncos of Boise State. But do they have enough in the tank to take down Steve Fisher and the Aztecs and actually claim the MW AQ?

How about those Ducks? A few months ago, they weren't in the picture all that much. Now here they are in the Pac-12 final and will absolutely be dancing. I'm sure they'd love to end Arizona's hopes of a No. 1 seed and take the Pac-12 crown.

Talk about a Cinderella run before the big dance. Auburn has won three games in three days as the second-lowest seed in the SEC to get to this point. What a run by Bruce Pearl in his first year with the Tigers. Auburn's reward for such a feat? Just a date with 32-0 Kentucky. Georgia, meanwhile, avoided the bad loss to South Carolina and should hear their name called on Selection Sunday, though with no top-50 wins, will likely end up as a double-digit seed. Arkansas looks to secure a spot among the top 16 and a protected seed.

The top two teams, seemingly all season long, meet for the Southland championship. Will the Lumberjacks get back to the dance after upsetting VCU last season? Or can the Bearkats find the perfect time to get their first win of the season against SFA?

The winner of this game will get to claim the SWAC championship, but because Southern is ineligible for the NCAA Tournament, Texas Southern gets the automatic bid.

The Sun Belt's first semifinal is a rematch of last season's final, won by UL Monroe. Can the Cajuns do it again? Could be a close set of semifinals, as this league came down to the final day.

The Aggies lost just one time during all of conference play in the WAC. That's the good news. The bad news is that one team happens to be the team that stands in State's way of winning their fourth straight WAC title and fifth in six years.
Posted by Bill_Riccette at 7:35 AM