It was a wild weekend in college basketball, a perfect way to end February and begin March.

We have a new team on the top line. With their loss to BYU on Saturday, Gonzaga dropped to a No. 2 seed and now have a very steep uphill battle to get back to the top line. Taking their place as the top seed in the West is Villanova, who wrapped up the outright Big East championship by defeating Xavier on Saturday. Right on their tail is Wisconsin, who claimed the Big Ten championship with thei win over Michigan State, and Arizona, clinching a share of the Pac-12 title by virtue of their road win at Utah.

As for the new AQs, there are plenty of them and not just at the bottom of the bracket.

Boise State completed a season-sweep of San Diego State when they pulled the upset at Viejas on Saturday, pulling the Broncos to a tie atop the Mountain West standings, but the aforementioned sweep gives Boise the tiebreaker, and thus the automatic berth from the MWC in today's projection.

We have a three-way tie atop the Atlantic 10 standings and VCU is not one of them. Dayton's upset win over the Rams knocked Shaka Smart's team out of the A10 picture for now, while the Flyers kept pace with Davidson and Rhode Island. However, due to holding victories over both Dayton and Rhode Island, Davidson gets the AQ spot. Two key games in the A10 this week will decide the champion. Dayton hosts Rhode Island on Tuesday and Davidson is home against VCU on Thursday.

In the American Athletic, Tulsa needed overtime to win at Memphis Saturday, which was key because SMU fell at Connecticut Sunday. This means Tulsa now has a half-game lead on the Mustangs, enough to give the Golden Hurricane a spot in today's field.

Because of this, the bubble shrunk quite a bit, as far as today's selections went. Because of the fewer amount of at-large spots, teams like Temple and Texas A&M are now among the last four in, though that should change over the next two weeks.

After all that, here now is the full bracket. (Bracket Matrix) 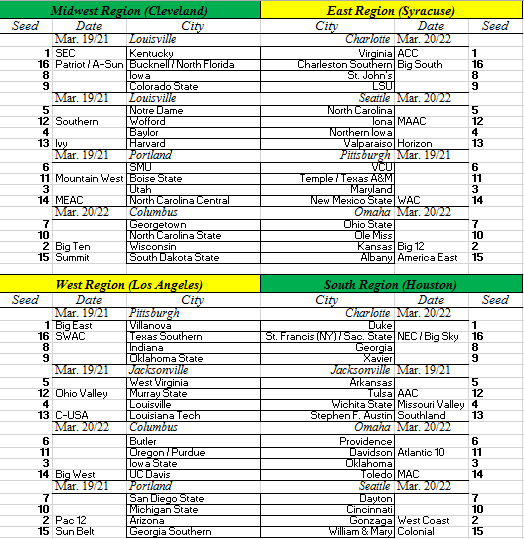 Note: Northern Kentucky is ineligible to receive the Atlantic Sun's automatic bid due to them still transitioning into Division I, but are allowed to compete for the conference championship. If they happen to win the A-Sun tournament, then the team they beat in the finals will receive the AQ.

Big South First Round (all games in Myrtle Beach, SC)

Ohio Valley First Round (all games in Nashville)

No. 5 Lipscomb at No. 1 North Florida
No. 3 South Carolina Upstate at No. 2 Florida Gulf Coast

Metro Atlantic First Round (all games in Albany, NY)

Missouri Valley First Round (all games in St. Louis)

Posted by Bill_Riccette at 7:36 AM