Four more teams are officially dancing, bringing our total to 11, as Gonzaga (West Coast), North Dakota State (Summit), Robert Morris (Northeast) and Valparaiso (Horizon) won yesterday to claim their spots. Today, one more ticket will be punched, bringing our total to a dozen automatic bids clinched. It is also the last bid up for grabs before 15 of them will be handed out on Saturday. Along with the one championship game, nine conferences begin tournament while four others continue their action.

BYU did lose in the West Coast final and once again, must endure the long wait until Sunday. They are still in the field today, but there are a host of bubble teams ready to take the Cougars' spot in the field.

Let's take a look at the bracket, likely the last time minor changes are made with all the tournament action today and the next few days. 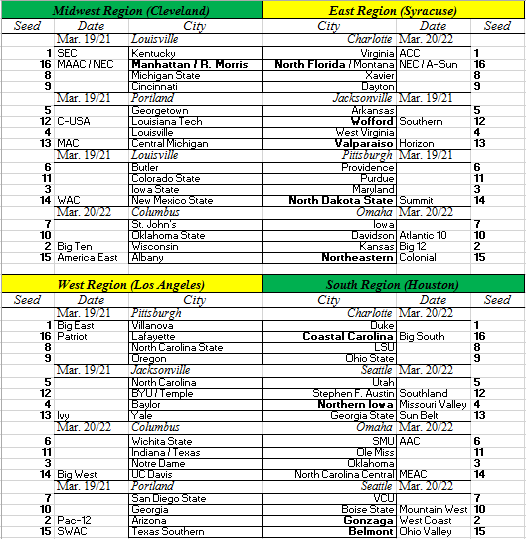 As for the games today...

After the top two seeds, Bucknell and Colgate, were both defeated in the semifinals, we have the six versus the four in the Patriot final. American looks for their second-straight Patriot League championship while the Leopards have not danced since 2000. The Eagles swept the two meetings in the regular season.

ACC Second Round (in Greensboro, NC)

The Hurricanes are the team to watch, as they sit just around the tournament field and a loss to the Hokies could end Miami's hopes for an at-large. A win gives them a shot at Notre Dame, and a chance to vault themselves right into the tournament.

Atlantic 10 First Round (in Brooklyn, NY)

Here's an example of how things can change quite a bit in just one year in college basketball. Saint Louis was the No. 1 seed in last year's A-10 Tournament. Now they are wearing their road jerseys throughout this year's edition.

Quite the group of names in the opening round at MSG. You have Creighton, who was a No. 3 seed in last year's NCAA Tournament, now sitting at the bottom of the Big East. You have Marquette, normally a Big East power, struggling in their first year under Steve Wojciechowski. You have Seton Hall, who endured one of the more epic meltdowns during the season. And then there's DePaul. But DePaul isn't at the bottom of the field, so that's a plus for them.

Big Ten First Round (in Chicago)

It was certainly a disappointing year for the Cornhuskers. After getting to the big dance last season, they find themselves playing on Day 1 of the Big Ten Tournament.

The Longhorns look like they might be in unless they completely crumble, so it is imperative for their tournament hopes that they defeat the Red Raiders. It will be even better for them if they can also defeat Iowa State tomorrow.

A new champion will obviously be crowned in Conference USA with last year's champion Tulsa now in the American Athletic. The top four seeds play tomorrow, including bubble contender Old Dominion, who has quietly hung around, but may need to win the auto-bid.

MAC Second Round (in Cleveland)

The four winners from Monday have joined the top four seeds in Cleveland in a bracket that now resembles those from the Southland or Ohio Valley. Kent State and Toledo await the winners in the quarterfinals while Central Michigan and Buffalo are off until the semifinals.

NC Central puts their undefeated conference season on the line in Norfolk, hoping to get to their second-straight NCAA Tournament. The winners today get tomorrow off before Friday's semifinals.

The Mountain's opening round features something we're not used to seeing: New Mexico and UNLV actually playing in this round. But here we are. There are only two games today and ten teams in the field due to the ineligibility of San Jose State.

Just to clarify, the Mountain West tournament is at the Thomas & Mack Center on the campus of UNLV while the Pac-12 is playing at the MGM Grand.

As for the games themselves, the key team is Stanford, whose at-large hopes have all but done up in smoke, but a run to the final just might (and I stress the word "might") get them in the conversation, considering a run to the finals would mean they will have beaten Utah and, likely, Oregon.

SEC First Round (in Nashville)

I never expected Missouri to be in this position at the beginning of the season. But that's how the cookie crumbles, sometimes. The good news for Missouri and South Carolina is that Kentucky is on the opposite side of the bracket.


Southland First Round (in Katy, TX)

Early action in Katy where the winners meet No. 3 Texas A&M-Corpus Christi and No. 4 Northwestern State. The top two seeds, Stephen F. Austin and Sam Houston State, have a bye to the semifinals.

Texas Southern is in an interesting position, as both the No. 2 and No. 3 seeds, Alabama State and Southern, are banned from NCAA Tournament play, but are allowed to compete in the SWAC Tournament. Yet, for whatever reason, Arkansas-Pine Bluff cannot play in the SWAC Tournament. Nonetheless, TSU may just have to get to the final, especially if Alabama State and Southern meet in the semifinals.

Posted by Bill_Riccette at 6:49 AM