What a wild final regular season weekend it was, with bubble teams losing and creating more of a mess than we had at the start of the Saturday. We also saw five tournament tickets officially punched, including a potential bid thief.

Let's take a look at the bracket, first, then we'll get into some of the stuff from the weekend. 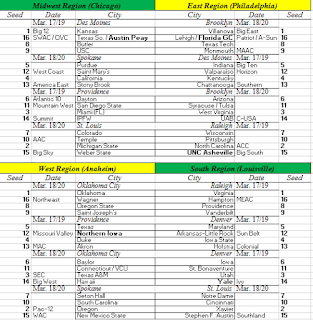 
Wichita State sat at the top of the Missouri Valley pretty much the entire season. But they struggled in their quarterfinal game against Loyola-Chicago before being bounced in the semifinals by eventually tournament champion Northern Iowa in overtime. The Panthers will make their second straight NCAA Tournament appearance as Missouri Valley champion, while the Shockers have a long wait until Selection Sunday to see if they will join the Panthers in the Big Dance.

It's a very tough call right now, especially with so many power-conference bubble teams still with chances. The Shockers went just 1-3 against the RPI top 50, that lone win coming at home against Utah. They are also just 4-7 against the top 100, with two of those wins coming against an Evansville team that won't be in the tournament and is 94th in RPI. However, the road win at Northern Iowa looks a bit better with the Panthers claiming the Valley's aut-bid.

You could argue that not having Fred VanVleet cost them against USC, Alabama and Iowa. VanVleet played, but was hampered by injuries in the loss at Tulsa. However, their worst losses, including at Illinois State and the two losses to UNI, came with VanVleet in the lineup. Their non-conference schedule ranks 11th in the country, but they were just 6-5 against it. Again, you could argue the VanVleet issue, but the numbers are what they are.

Wichita will be hotly debated all week, no question. But as it stands now, I have them as the first team out of the field. The 4-7 mark against the top 100 could be a dagger. I think if the committee does select Wichita, they'll be sent to Dayton for the First Four.

Austin Peay's run in the Ohio Valley tournament was nothing short of magical. They entered as the No. 8 seed, the lowest in the field. They had to win four games in four days, including over top-seeded Belmont, who had a bye directly to the semifinals. A great run for the Governors. However, their record stands at 16-17 in the eyes of the committee (non-Division 1 games do not count on a team's tournament profile). So that pretty much ensures that AP will be in the Dayton for the First Four, possibly as the No. 68 team on the seed list.

Florida Gulf Coast helped the Atlantic Sun avoid a bit of embarrassment and confusion. They went up against tournament-ineligible Stetson for the championship. But if Stetson had won, North Florida would have gotten the automatic bid without even playing in the championship. Dunk City, however, blocked a late shot in overtime to ensure that wouldn't happen, and the Eagles are in the field for the only the second time in school history and first since their magical run to the Sweet 16 in 2013.

And congratulations to the Yale Bulldogs, champions of the Ivy League and dancing for the first time since 1962.

Even in non-tournament games, we had some crazy stuff happen. Missed free throws at the end of regulation doomed VCU in their overtime loss at Dayton on Saturday. Despite the loss, the Rams still sit as the last team in the field. However, a win would have made their position a lot more stable. Still, a share of the A-10 title and six top-100 wins has them just inside for now.

North Carolina won at Duke, while Miami got blasted at Virginia Tech, giving the Heels the outright ACC championship and keeps them alive for a No. 1 seed, though they may have to win the ACC Tournament to get it.

Cincinnati really helped themselves by knocking off SMU at home Sunday and moving into the top 40 of the RPI. Their win over VCU certainly helps their case to snag an at-large bid and if they can defeat Connecticut for a third time in the AAC Tournament, the Bearcats are likely dancing.

Indeed, Cincinnati and Connecticut will meet in the AAC quarterfinals. Both are bubble teams, so the winner is likely in, though I don't think the loser is necessarily out. They may have to play in Dayton, however. Same goes for the ACC quarterfinal between Syracuse and Pittsburgh. I'm also intrigued by the Butler-Providence Big East quarterfinal. The loser probably is wearing their road uniforms in the first round.

With Championship Week underway, the Tournament picture will change very quickly in these final six days before Selection Sunday. Three more bids are up for grabs tonight, as well as a host of other tournament action. Here's what's going down tonight.

These teams tied for the Colonial regular season title at 14-4. The Pride are going for their first tournament berth since 2001, while the Seahawks have not danced since 2006.

The rubber match between these two, as both won on the opponent's home court during the season. Iona could potentially steal a bid from a bubble team if they win. Monmouth has not been in the dance since 2006 while Iona's last trip was 2013.

A pair of first-year head coaches in Matt McCall and Steve Forbes lead their teams to this championship game. The Mocs' last tournament was 2009, while ETSU last played in the NCAAs in 2010.