Just when it looked like Vanderbilt was riding momentum and heading toward an NCAA appearance, they go ahead and suffer a bad loss at the worst possible time. The Dores lost to Tennessee in Thursday's SEC second round, marking their third sub-100 RPI loss, after also losing at Arkansas and Mississippi State. Vandy also sits at just 2-7 against the top 50, though they can get back up to four wins if Florida climbs into the top 50. Problem there is that the Gators are also fighting for a bid themselves and there are only so many bids to hand out.

Vanderbilt sits this morning among the last four in, but can easily be passed this weekend. Their case is helped by having home wins over the top two seeds in the SEC, Texas A&M and Kentucky. along with the sweep of the Gators, which could come into play when the committee fills out the last few spots.

The aforementioned Florida and Alabama both won on Thursday to keep their bubble hopes alive going into today's quarterfinals against Texas A&M and Kentucky, respectively. Also staying alive Thursday was Michigan, who survived a scare from Northwestern in overtime. The Wolverines have to defeat Indiana or their hopes are likely dashed.

Also of note in the Big Ten, Wisconsin lost to Nebraska, giving them five sub-100 losses along with the season-opening loss to Western Illinois. I think the Badgers end up in an 8/9 game in the first round, despite the losses, because of all the good wins they have and the roll they went on in the second half of the season.

Let's take a look at the bracket, which certainly underwent some changes overnight. 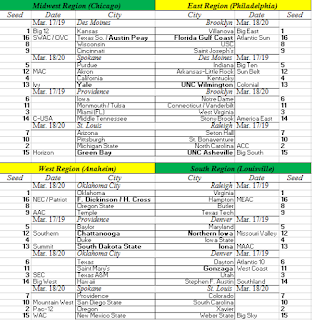 A lot of bubble action today, especially in the Atlantic 10, American Athletic and SEC.

The AAC quarterfinal between Cincinnati and Connecticut is quite intriguing. The Huskies have already lost twice to the Bearcats and a third loss, sitting right on the cut line, could spell trouble for Connecticut. We also have the top three seeds, Temple, Houston and Tulsa, in action, all on the bubble, though Houston may need the auto-bid to get in. A second loss to Memphis for Tulsa could end their tournament hopes.

In the A-10, it's Bubble City. VCU, St. Bonaventure and George Washington all looking for wins, particularly GW, who meets Saint Joseph's. They've got good wins, including home wins against Virginia and Seton Hall. But they're trying to overcome a low RPI for a mid-major, plus three bad losses, including at DePaul and at Saint Louis.

And we talked earlier about the SEC, namely Florida and Alabama. Florida could move into the field if the defeat A&M, while Alabama probably needs to boost their RPI a bit, so it may take a run to the SEC final for the Tide.

Here's your schedule for today, including a ton of semifinal games, leading up to the big day tomorrow with 14 championship games.

Big Ten Quarterfinals (in Indianapolis, IN)