It was a wild day for bubble teams across the country. Some scored huge victories, others flopped big time and likely lost any hope of earning a bid.

It started in Indianapolis when Kameron Chatman drilled a three-pointer with 0.2 seconds left to lift Michigan over Indiana and into the Big Ten semifinals against Purdue. That was Michigan's fourth top-50 win, third against the top 25. Two of those four wins came on neutral courts, the other being against Texas. The downside is that those four wins are also the only four top-100 wins for Michigan. But the value of this win, having no bad and with results from bubble teams elsewhere, might be enough to vault Michigan in. They sit among the last four byes.

It took four overtimes, but Connecticut prevailed over Cincinnati in the American quarters, moving the Huskies into the RPI top 50 and scoring their fourth top-50 win and seventh against the top 100. Just like Michigan, UConn has no bad losses and also won at Texas. And just like Michigan, Connecticut is currently among the last four byes.

On the flipside, it was not a good day for some bubble teams, particularly in the SEC. Florida and Alabama both lost, likely ending their hopes. The free-fall for both teams will end with them landing in the NIT.

Then we get to South Carolina. The Gamecocks lost for a third time to Georgia (who is quietly moving toward the bubble, themselves). If you take a look at South Carolina's profile now, after the Georgia loss, it is not good. The Gamecocks are left with just one top-50 win (at Texas A&M). They lost Tulsa as a top-50 win after Tulsa got blasted by Memphis (ending the hopes for Tulsa, by the way). And their non-conference schedule rank is atrocious, currently ranked 270th and the committee usually always frowns upon that. And they dipped below 60 on the RPI table, which could also be troubling.

St. Bonaventure also lost a tough one against Davidson. The Bonnies do still have a high RPI (30), won at Dayton and swept Saint Joseph's. Right now, they sit among the last four in.

Friday was also a good day if you're a fan of a mid-major team, namely Saint Mary's, Monmouth and Wichita State. Indeed, Friday's results helped moved the Shockers back into the field as other teams start to play their way out after leaving a bad taste in their last showing. The Gaels are among the last four byes while the Hawks and Shockers join St. Bonaventure and VCU among the last four in. And even Valparaiso is still alive. A strong non-conference and a win at Oregon State gives the Crusaders a pulse. Probably won't be enough, but they're at least in the discussion.

Of course, bubble teams still aren't out of the woods yet. That's because we're guaranteed to have a potential bid thief playing on Sunday in the AAC championship. Memphis blasted Tulsa right out of the tournament and Tulane upset No. 2 seed Houston to set up their semifinal date. That means one of those two teams will play on Sunday for the automatic bid and to steal a bid from a potential bubble team. As if things weren't wild enough.

At the top of the bracket, Kansas' win over Baylor to move into the Big 12 championship has pretty much wrapped up the overall No. 1 seed for the Jayhawks, even if they lost to West Virginia. Kansas now has a whopping eight wins against the RPI top 25, 14 against the top 50 and 19 against the top 100.

Villanova probably will get a top seed as well. That leaves two spots and probably four, maybe just three, teams in play. Xavier's loss to Seton Hall ended their hopes for a No. 1 seed and Buddy Hield's game-winner didn't count, giving Oklahoma seven losses. That probably drops Oklahoma to a No. 2 seed. Virginia, Michigan State and North Carolina are all in the running and even Oregon still has a chance, though their loss against UNLV might hold them back.

Virginia now has eight top-25 wins and nine against the top-50. Those wins include Villanova, West Virginia and California out of conference. Michigan State is 6-4 against the top 50, but hold that win over Kansas back in the Champions' Classic in November that could be a deciding factor. And then you have North Carolina who won the ACC regular season title and just throttled Notre Dame in the semifinal. But the Heels still have a losing record against the top 50 at 4-5. But if they defeat Virginia and get to 5-5, they would have the double-dip of the regular season and tournament titles in the ACC, which could vault them to the top line, possibly joining Virginia.

Right now, we're going with Kansas, Villanova, Virginia and Michigan State on the top line with North Carolina and Oregon behind. Oklahoma and Utah round out the twos.

Let's check out the bracket and then check out all the games today. 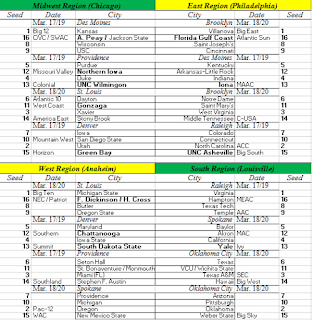 Buckle up, because today is a very busy day. 14 tournament bids are at stake today while the remaining five conferences will set up their championship games. Enjoy the games and we'll see you tomorrow for the next-to-last post here, setting up Selection Sunday with my final bracket coming later in the day Sunday.

Big Ten Semifinals (in Indianapolis, IN)