We've made it to the final weekend of the regular season, as teams make last-ditch efforts to boost their tournament hopes. A lot of big games this weekend, including North Carolina at Duke, as well as the first tournament bids being handed out this weekend, the first one today in the Ohio Valley when No. 2 Tennessee-Martin battle the Cinderella story in the OVC, eighth-seeded Austin Peay, who upset top-seeded Belmont in Friday's semifinal, sending the Bruins to the NIT.

Two other top seeds were knocked off this week. Atlantic Sun No. 1 North Florida got blasted by Florida Gulf Coast in the semifinals, while Bucknell lost in double-overtime against No. 9 Holy Cross in the Patriot League quarterfinals. The Bison will play in the NIT. However, the Ospreys still have NCAA Tournament hopes. The reason is because Florida Gulf Coast is playing tournament-ineligible Stetson in Sunday's championship game, and per the A-Sun's decision, if Stetson wins the A-Sun tournament, then the regular season champion (North Florida), will claim the conference's automatic bid to the NCAA Tournament. So UNF will be rooting hard for Stetson to knock off Dunk City. By the way, FGCU beat Stetson by 29 at home on January 9.

I decided to put Florida Gulf Coast in the field, since they are still playing and the higher seed in the final. Should Stetson win, I will revert back to North Florida. Also, we now have Lehigh (Patriot) and Tennessee-Martin (Ohio Valley) in the field, both playing in Dayton in the First Four.

This weekend also features plenty more conference tournament action, including championships in the Missouri Valley and Big South on Sunday.

One other note from the field: Oregon State forward Tres Tinkle suffered a foot injury Tuesday and the Beavers struggled with USC Wednesday. Tinkle has already been ruled out for Saturday's finale at UCLA. If Tinkle's injury lingers and OSU doesn't play that well, their tournament hopes are in serious question. For now, the Beavers are just out, but if they show they can perform well without Tinkle, they'll move back in. Today's last four in are Michigan, St. Bonaventure, Tulsa and Cincinnati.

Here's a look at the final bracket of the regular season before things kick into high gear for Championship Week. 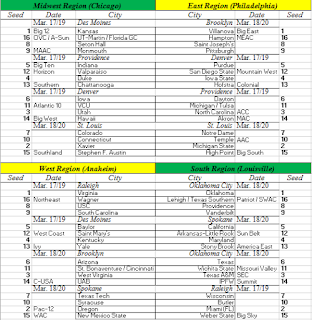 Enjoy what should be a great final weekend and we'll be back Monday to recap the weekend and setup for Championship Week. Take care, everyone.

Posted by Bill_Riccette at 5:20 AM