Championship Week started off with a bang. It was a very busy Monday, to say the least. Upsets galore. Let's start right off by taking a look at the bracket, which changed quite a bit at the bottom, then get into some of Monday's action. 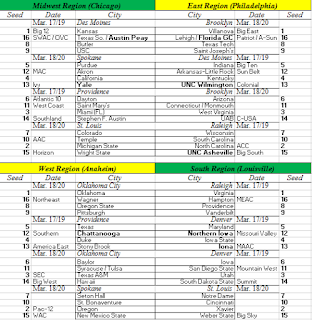 It was not the best day to be a No. 1 seed in a conference tournament, as a whopping four of them lost on Monday, two of which in championship games. Monmouth fell to Iona in the MAAC Championship, while Hofstra lost in overtime to UNC Wilmington. The other top seeds losing were Valparaiso against Green Bay in the Horizon semifinals and IPFW to North Dakota State in the Summit semifinals.

It wasn't all bad for the top seeds, however, as Chattanooga became the first top seed to win their conference tournament, as they claimed the automatic bid in the Southern Conference, defeating East Tennessee State. Also, Stony Brook handled Hartford to return to the America East championship game, where once again, they will play at home for an opportunity to dance for the first time in school history. They'll host Vermont on Saturday. And West Coast top seed Saint Mary's handle Pepperdine, the team that swept the Gaels in the regular season.

I think it's safe to say that Hofstra and IPFW are headed for the NIT. Valparaiso will be up for discussion, but ultimately, I think they fall short, particularly because of some of the teams in the at-large discussion.

Monmouth will be the big question here, among these teams. They are such an interesting case for the committee. They have quality wins, over USC and Notre Dame, both tournament teams, both on neutral courts. They also won at UCLA and at Georgetown, two traditionally good teams. Sure, both of them stumbled, but still quality wins for a team like Monmouth. The bad, of course, is the trio of sub-200 losses to Army, Canisius and Manhattan, all on the road.

But we know the committee has rewarded teams in the past for playing a lot of road games. Look at Iona in 2012. The Gaels played a hefty amount of road games that season, playing the entire month of December away from home. They won the MAAC regular season title by two games, but lost to Fairfield in the conference semifinals. However, the committee still handed Iona an at-large spot, the last spot in the field.

That brings us back to Monmouth. The Hawks lead the NCAA with 17 wins away from, and they went 5-2 in true road games during the non-conference schedule, including the aforementioned wins over UCLA and Georgetown.

The at-large pool will have some intriguing teams battling for spots, including Monmouth, Wichita State, Valparaiso and at least one of Saint Mary's or Gonzaga. I think Monmouth is still in. Bad losses aside, I think the committee should be encouraged by all the road games the Hawks played and the good wins they picked up. The Notre Dame and USC wins are better than some of the other bubble teams. Plus, quite frankly, some of the teams we have outside the field don't look that good and don't look like they should be in the field, which helps Monmouth.

There are still five days until Selection Sunday and plenty of time for bid thieves to strike. But as of now, I think the Hawks get in and are slotted for the First Four. They stand as the third-to-last team in, ahead of Syracuse and Tulsa. VCU is now out of the field, with Wichita State, Gonzaga and Florida the next teams out.

Four more bids will be handed out tonight, plus plenty more tournament action, including the first Power 5 tournament getting underway in the ACC. Here's the schedule for tonight.

ACC First Round (in Washington, D.C.)

SWAC First Round (in Houston, TX)