It felt pretty weird talking about Gonzaga on the bubble. We're so used to the Bulldogs playing very well every season and being assured of a tournament berth. But heading into the West Coast Conference tournament, Mark Few's team was in a position where they almost had to win the automatic bid to reach their 18th consecutive tournament. Sure enough, the Zags were up to the task, avenging the two losses to Saint Mary's during the regular season to defeat the Gaels and punch their ticket to the dance. No more bubble talk for Gonzaga. They're in.

All eyes will now turn to Saint Mary's, as they join an at-large pool which includes Monmouth, Wichita State and Valparaiso, among mid-majors. However, despite the loss, the Gael's profile actually improved a bit. Gonzaga's win moved their RPI rank from 60 to 47, which now gives Saint Mary's two top-50 wins. The Gaels also hold a top-40 RPI and six top-100 wins, which are more than Monmouth and Wichita State. I think the Gaels have played well enough to merit an at-large. The two wins over Gonzaga are a big help as well. As of now, they are slotted for Dayton in the First Four as the fourth-to-last team in the field. Tulsa moved out of the field thanks to Gonzaga and Syracuse now sits as the last team in heading into a big bubble game against Pittsburgh in the ACC Tournament. This has almost become a must-win situation for the Orange, especially with teams like Tulsa and VCU still able to play.

Three other tickets were punched Tuesday. Green Bay is dancing for the first time since 1996 after defeating Wright State to win the Horizon League tournament, South Dakota State exacted revenge on North Dakota State in the Summit League final for their 3rd NCAA trip in five seasons and first since 2013 and Fairleigh Dickinson won at Wagner to book their first trip to the dance since 2005 and a likely spot in Dayton for the First Four, possibly against Austin Peay.

Let's see how the bracket now looks with the four new entrants to the field. 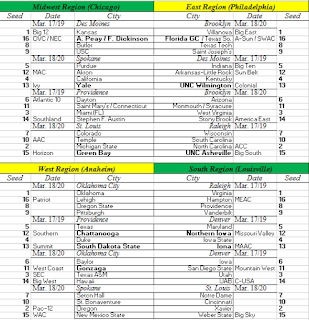 Tonight, just one bid is up for grabs, the last one before 14 are at stake on Saturday. Plus, more conference kick off their tournaments, including all of the Power 5 conferences (ACC enters their second round). Here's your schedule for today. And as always, enjoy the action.

And be sure to check out the Bracket Matrix to see how I view the teams compared to dozens of bracketologists, including the famous ones like Joe Lunardi, Jerry Palm, Brad Evans and many, many more.

ACC Second Round (in Washington, D.C.)

Big Ten First Round (in Indianapolis, IN)

Southland First Round (in Katy, TX)

Atlantic 10 First Round (in Brooklyn, NY)

SEC First Round (in Nashville, TN)

Posted by Bill_Riccette at 4:35 AM