Championship Sunday provided a bit of everything. Drama, buzzer-beaters, you name it.

As mentioned yesterday. 14 teams officially punched their ticket to the NCAA Tournament, some of them in grand style, like Buffalo and Cal State Bakersfield, hitting last-second shots to send them to the tournament.

Kansas, North Carolina and Oregon completed the double-dip in their respective conferences, and as a result, all now sit on the top line. And with a win today, Michigan State should also join them, though you can make a case Sparty has claimed a top seed already with how well they've played of late and their performance out of conference.

But oh that bubble continues to get more and more complicated just hours before the brackets are revealed. Temple loses to Connecticut and San Diego State, for the second year in a row, lost in the Mountain West final to a team in Fresno State that wasn't going to dance without the automatic bid.

So now we take a look at their respective profiles. Temple is now 62nd in RPI with a non-conference rank of 75. However, they were just 7-6 out of conference and their best win came against Fairleigh Dickinson. The positives are that they swept Cincinnati and Connecticut, both of whom seem to be headed to the dance, and beat SMU at home. I have the Owls just in right now.

The Aztecs, however, weren't so lucky. They sit as the first team out after going back and forth a bit on some teams.

The Aztecs are No. 40 in RPI and have the No. 2 non-conference schedule. But a 5-6 mark doesn't look good, and unfortunately for Steve Fisher's team, the Mountain West, as a whole, was surprisingly down this season. They do own a top-50 win over California on a neutral court, but only two other top-100 wins over Fresno State and Long Beach State.

I decided to move Monmouth back into the field after briefly taking them out. I still feel Monmouth should be rewarded for all those road wins and they nearly have two top-50 wins again (USC sits No. 51). I also moved Syracuse back in. Why? After going back on it and thinking about it, Syracuse does still own very good wins with Jim Boeheim on the sideline. The Orange, overall, went 5-6 against the top 50 and 8-10 against the top 100. In games where they had Boeheim, they were 5-5 and 8-8, respectively. And all five of those top 50 are against teams currently projected in the field. If the committee gives the Orange a bit of a pass on the Boeheim suspension, they have a case to be selected. We'll find out today.

Here now is your next-to-last update before my final bracket later today. 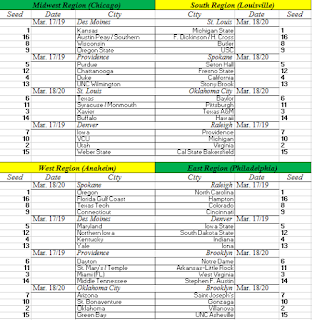 Five championship games, including a potential bid thief on the loose, so Monmouth isn't out of the woods yet. They'll be rooting hard for Connecticut. Enjoy your Sunday and I'll talk to you later today for my final bracket.

Big Ten Championship (in Indianapolis, IN)