Happy February 29th, everyone, and happy birthday to those who actually get to celebrate their birthday on the actual date today, instead of either February 28th or March 1.

Speaking of which, March 1 is tomorrow, which means March Madness is almost here. Just 13 days until the official bracket is released. To start getting you ready, conference tournament action begins tomorrow in the Atlantic Sun and the Patriot League.

Depending on how things outside of here shake out, this will be my last week of two updates. Next week, per tradition (again, depending on other events), I will post every day as tournament action rolls along, updating the bracket as more champions are crowned and automatic bids are filled. In fact, the first tournament bid will be handed out on Saturday in the Ohio Valley.

So with that in mind, let's recap some of the action from the weekend. The big change at the top is Virginia moving back onto the top line after their win over North Carolina, while Xavier suffered a bit of a letdown after their big win over Villanova, though Seton Hall is by no means a bad team. The win all but clinched a tournament bid for the Pirates, who will dance for the first time in 10 years. They've been close in recent years, but this year, they will finally break through. Great season for the Hall.

Despite the loss at Texas, I actually moved Oklahoma up to No. 2, though it was more Villanova being dropped to No. 3. The Sooners still have seven top-25 RPI wins, second to only Kansas' nine. And that head-to-head win over the Wildcats will still loom large for OU.

I also want to mention the great turnaround by last season's runners-up, Wisconsin. This was a team who, after their January 12 loss at Northwestern, was sitting at 9-9 overall and 1-4 in the Big Ten. Since then, they've only lost once, by 12 at Michigan State. Their recent roll includes home wins over Michigan and Indiana, plus road wins at Maryland and Iowa. What a story in Madison. The Badgers currently sit as a No. 7 seed and could be dangerous in March. Remember, Michigan State made the Final Four last season as a No. 7.

VCU reclaimed the Atlantic 10 auto-bid thanks to their hard-fought win at George Washington Saturday, coupled with Dayton's continued free-fall on Saturday, losing at home to Rhode Island. The Rams are tied with Saint Joseph's at 13-3 in the standings, but own a head-to-head victory. A big game awaits on Saturday when VCU visits Dayton. The Rams could help their at-large hopes with a victory, even if they don't win the A-10 Tournament.

This, by itself, caused some shakeup on the bubble. As it stands, VCU took Tulsa's spot in the field, who lost at Memphis Sunday. Not a good loss for the Hurricane, who also own a home loss to Oral Roberts (RPI No. 150). Also working against Tulsa (and Cincinnati, the second team out), is the hot streak of Vanderbilt, who knocked off Kentucky on Saturday, giving the Commodores four top-50 wins and a top-50 RPI. Vandy not only is in the field, but they are above the First Four cut line as a No. 10 seed.

Syracuse, Alabama, Florida and Gonzaga sit as the last teams in the field. Florida has been free-falling of late, but their wins over West Virginia and Saint Joseph's, plus a top-five non-conference schedule, may just be enough to sneak them in. They can really help themselves with a win Tuesday against Kentucky. And with Connecticut falling out of the top 50, Gonzaga doesn't boast a single top-50 RPI win and just three top-100 wins (Connecticut and Washington on neutral courts, BYU at home). However, the Zags have a top-50 non-conference schedule and no bad losses, which most bubble teams cannot claim.

No bad losses is also why Stanford has quietly played their way back onto the bubble. But they still have some work to do, as they sit just 14-12 overall. The Cardinals sit in the "Next Four Out" group.

Let's take a look at the bracket. 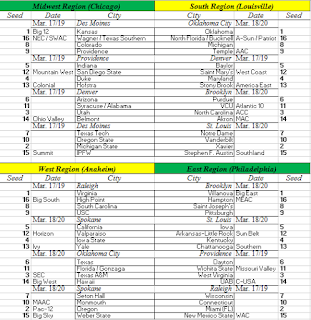