Brackets For All You Sweethearts Out There

It was another crazy week of college action that saw two top teams go down on the road. Xavier lost by double-digits at Creighton, while Iowa fell to Indiana at Assembly Hall.

Iowa does remain on the top line for now, sitting fourth on the seed list, while Xavier fell to number five, putting them on the two line. Moving up the board is Virginia. They've got four wins against the RPI Top 25, including wins over Villanova and West Virginia. Another four wins against the top 50 gives them eight total, as well as four more against the top 100, for a total of 12. The Cavaliers visit Duke Saturday in what should be a fun game. And in two weeks, they host North Carolina in a game that could decide the regular-season ACC championship.

Moving into the field as at-larges are Alabama, Wisconsin and Cincinnati. LSU lost the SEC's AQ bid for the moment, dropping them from the field, while George Washington and St. Mary's also fell out. GW lost at home to Saint Joseph's, while St. Mary's was swept by Pepperdine, losing at home on Thursday, which killed their RPI, dropping them to 72 at the moment. Brutal loss.

The committee loves teams with strong non-conference schedules and that's where the Tide and Badgers come into play. Alabama's non-conference schedule ranks 16th and includes neutral-court wins over Notre Dame and Wichita State, both in the top half of the field. They've also defeated South Carolina and Texas A&M at home.

For Wisconsin, they have been playing better of late, as they try to recover from the early-season blunders of losing at home to Western Illinois and Wisconsin-Milwaukee. It certainly helps that their two best non-conference wins (Syracuse and Temple) have been looking better and better as the days go by. Home wins over Michigan State and Indiana help, too, especially with the Hoosiers having just defeated Iowa. Add the fact that their non-conference schedule currently ranks 34th, and Wisconsin is in the field, for now. A tough upcoming stretch will determine if Wisconsin will stay in the field. The visit Maryland on Saturday and Michigan State on Thursday. Win one of those games, and the Badgers will have a compelling case heading toward Selection Sunday.

The last team in the field right now is Cincinnati. It was very close, but a head-to-head win over Tulsa helped tip the scales in the Bearcats' favor. Good wins for Cincy also include at Connecticut and VCU and a win over George Washington in the Barclays Center Classic. Butler was also in the mix, but just have the win over Notre Dame to hang their hat on right now. A big opportunity awaits on Saturday for the Bulldogs when they host Xavier.

However, Tulsa gets a chance for revenge, and possibly to take Cincinnati's spot in the field, on Thursday when the teams meet at Tulsa. The Bearcats also still have to host UConn next Saturday and SMU in the season finale on March 6.

With that, let's take a look at the full bracket, followed by conference rundown. 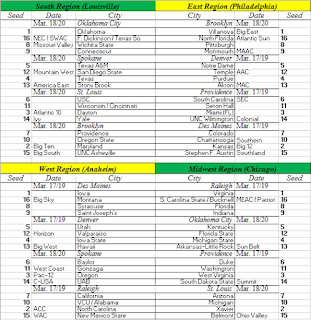