Not as many spots available in today's projection, thanks to VCU and Saint Mary's, two teams that would be squarely on the bubble without their conference's auto-bid, taking the lead in their respective leagues, the Atlantic 10 and West Coast. The Rams were helped by Dayton's loss to St. Bonaventure and Saint Joseph's loss at Davidson. The Gaels handled their own business by completing the surprising season-sweep of Gonzaga. The Gaels and Zags are tied at 13-3, but the aforementioned sweep gives SMC the auto-bid and puts two West Coast teams in the field, though Gonzaga is now on the bubble as the last team with a bye. They've only got one top-50 win (Connecticut) and just a second top-100 win (Washington), both on neutral courts.

Today's last four in are Syracuse, Alabama, Butler and Oregon State. Just missing the cut were Cincinnati, Tulsa, George Washington and St. Bonaventure. Obviously this can change quite a bit. If teams like VCU, Saint Mary's, or even Wichita State or San Diego State stumble, the teams in the first four out can move right into the field. This is just another example of how bubble teams can claim their spots in the field and shrink the bubble.

Kansas remains the top team, followed by Villanova, Oklahoma and Virginia. The Cavs still have a strong record and good profile. But I found this interesting nugget from Patrick Stevens on Twitter. Virginia's loss at Miami clinched a losing road record for the Cavs. And it's been a long time since a team has done that and still earned a No. 1 seed. We'll keep the Cavs here for the time being, especially since they have a meeting with North Carolina upcoming. The race for the fourth number one seed will likely come down to Selection Sunday.

Let's take a look now at the bracket. And yes, you'll notice I paired Texas against VCU, aka Shaka Smart against his former team. And no, this was not on purpose. It just so happened they were paired together. 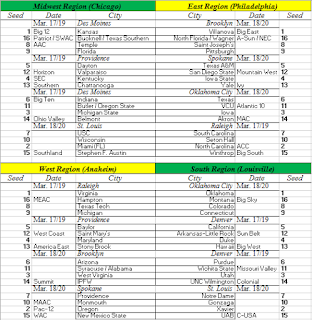 Enjoy the games this week and we'll see you this weekend for our next update.

Posted by Bill_Riccette at 5:13 PM