It's the first weekend of February and, for all you big sports fans, it's the weekend of historic Super Bowl 50. (Shameless plug, check out my podcast, Gridiron Graduates with Ian Wharton, to see who we think will hoist the Lombardi Trophy on Sunday.)

As for today, we're talking brackets. One change from Tuesday's bracket is that Temple is in the field as the "leader" of the American Athletic Conference (SMU is ineligible). The Owls are tied with Cincinnati at 6-3, but Temple has a head-to-head sweep of the Bearcats. This gives the ACC three teams in today's bracket, along with Connecticut.

Temple knocks Clemson out of the field, who do not play another team currently in the field until they host Virginia on March 1. Also just missing the cut line today are Vanderbilt, LSU and Wisconsin. The Badgers have some big chances coming up. After Wednesday's game against Nebraska, three of the following five games are against current tournament teams Maryland, Michigan State, Iowa and Michigan.

Vanderbilt scored a much-needed win at home Thursday against Texas A&M. They also still have second meetings with Florida, Kentucky and the Aggies remaining on the schedule.

Today's last four in are Saint Joseph's, Seton Hall, George Washington and St. Mary's. I know I dropped the Gaels quite a bit coming off their loss at BYU. But it also meant taking another look at their resume, now that Gonzaga is the current AQ from the West Coast. St. Mary's has zero wins against the RPI top 200 away from home. They're also overcoming a loss at Pepperdine. They're similar to South Carolina in that they have a gaudy record, but not much meat on the resume. 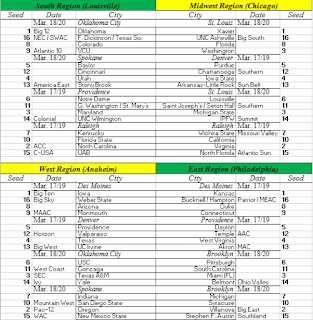