As we enter the final weekend of February, we have a new team sitting on the top line. After their impressive win over Villanova, Xavier now holds the last No. 1 seed in our projections, knocking Virginia to a two-seed. The Wildcats remain at No. 2 on the list, still headlining the East Region. Kansas (Midwest, No. 1 overall) and Oklahoma (South) also remain on the top line.

VCU suffered a very bad loss against George Mason, currently ranked 176th on the RPI table, per Live-RPI.com. That gives the Rams two losses outside the top 170, as they also hold a loss to 174th-ranked Massachusetts. They now sit in a three-way tie with Dayton and Saint Joseph's. Since the Rams and Flyers have not met yet (they meet next Saturday), RPI decides the current auto-bid, and that goes to Dayton (Flyers 17th, Hawks 25th, Rams 63rd). This moved VCU out of the field, down to the "next four out" group.

The Rams' loss ended up as Cincinnati's gain, as the Bearcats are in as the last team in today, joining Oregon State, Alabama and Tulsa in the last four in. First four out are Butler, Vanderbilt, George Washington and St. Bonaventure.

The Rams and GW meet today in D.C. in a huge bubble battle. The loser will have to make a deep run in the A-10 Tournament to get in.

Let's take a look at the bracket. 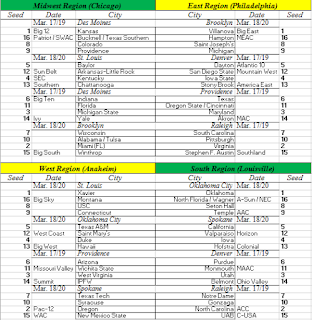 Enjoy the games this weekend. We'll be back after the weekend to see how the bracket looks as we get set for the start of conference tournaments on Tuesday.

Posted by Bill_Riccette at 8:19 AM