The confetti has fallen in San Francisco and Peyton Manning has likely played his final NFL game. If he did, what a perfect way to him to go out, as Super Bowl champion, as the Denver Broncos defeated the Carolina Panthers, 24-10, to win Super Bowl 50.

Now that the NFL season is over, it's full steam ahead towards the NCAA Tournament. We are just five weeks away from Selection Sunday and we're coming off a crazy weekend that saw the top two teams in the AP and Coaches Poll both lose. Oklahoma (AP No. 1) lost at Kansas State, while North Carolina (No. 1 in the Coaches Poll) lost at Notre Dame.

Despite the loss, I still have the Sooners as the overall top seed in the bracket. No. 2 RPI and their win over Villanova (who is now No. 2 in the bracket) still hold strong for Oklahoma. Rounding out the top line are 21-2 Xavier and Big Ten leader Iowa.

North Carolina sits at No. 7 on the seed list, behind Virginia and Kansas, with Maryland rounding out the twos.

In regards to the bubble, Clemson lost at Virginia Tech while Vanderbilt lost at Ole Miss, dropping them from the bracket. The bubble actually shrunk for this bracket as LSU currently holds the auto-bid from the SEC. Also new to the field as an at-large is Oregon State, fresh off a win over Colorado.

The win over Oklahoma was not enough to move Kansas State into the field. That's their only win against the top 50 (versus nine losses), and the Wildcats are 3-7 in Big 12 play. K-State does have two games against TCU and a game against Texas Tech left on the schedule. But even if they win those games, that only brings them to six Big 12 wins. They likely have to take at least two out of their three-game stretch against Kansas, Texas and Iowa State. The good news is the Jayhawks and Longhorns have to visit the Octagon of Doom.

Here is your updated bracket. 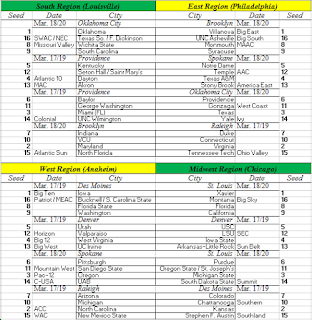