Sorry for being so late to the party, but I finally got around to building my first bracket of 2016. Better late than never, I guess.

It has been quite an interesting season so far and only sets up what should be an exciting final five and a half weeks of the season before Selection Sunday on March 13.

After going back and forth for a bit, I landed on Oklahoma, Xavier, Kansas and Iowa as the top seeds for my first bracket, with North Carolina, Villanova, Virginia and Texas A&M as the twos. It may seem against the grain, especially having Xavier number two overall, but I like the profile of the Musketeers. Obviously a long way to go and this is very fluid. Villanova can easily get to the top line, especially if they complete the season-sweep of Xavier on February 24.

As far as the first bubble here, the lteams currently slotted for Dayton are George Washington, Gonzaga, Seton Hall and Clemson. The Tigers have certainly built a nice stable of wins during conference play, something they really needed since they only have one other win against the RPI Top 200 (just barely, No. 198 Texas Southern).

So here it is, at long last, the first bracket of 2016. And as always, check out the Bracket Matrix. Always great work over there keeping track of all the brackets. 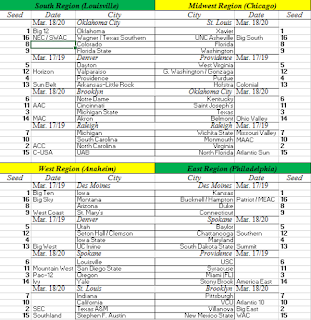 Posted by Bill_Riccette at 5:29 PM