A bit of a shakeup happened over the weekend in our bracket projections, which includes a new team sitting as the top overall seed. Coming off the heels of their sweep of Oklahoma, the Kansas Jayhawks are now the top team in today's bracket, headlining the Midwest Region, followed by Oklahoma (South), Villanova (East) and Iowa (West). The Hawkeyes leading the Big Ten is a boost, as well as their sweeps of Michigan State and Purdue. North Carolina, Virginia, Xavier and Oregon sit on the two line. The Ducks have the most top 25 (six), top 50 (eight) and top 100 (14) wins in the nation.

A couple new additions to the bracket from Friday. Thanks to their head-to-head win over Kentucky, LSU currently owns the AQ from the SEC (I used head-to-head results, followed by RPI). This actually shrunk the bubble. The Tigers would not have gotten an at-large as of today. Also entering the field, fresh off their wins over Iowa State and at Baylor, the Red Raiders of Texas Tech. The win at Baylor was the key road win the Red Raiders were desperately lacking. They now have four top-50 wins, an RPI rating of 32 and a top-50 non-conference schedule. Let's see if they can hang on to their spot.

Joining Tech among the last four in are Seton Hall, Washington and Florida State. Just missing the cut were Cincinnati, VCU, Butler and Tulsa.

Here now is your updated bracket. 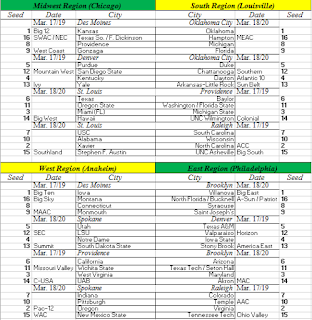 Posted by Bill_Riccette at 4:53 PM