Plenty of bubble action last night, which saw one Pac-12 team tumble out of the bracket. More on that later, but first, the bracket. 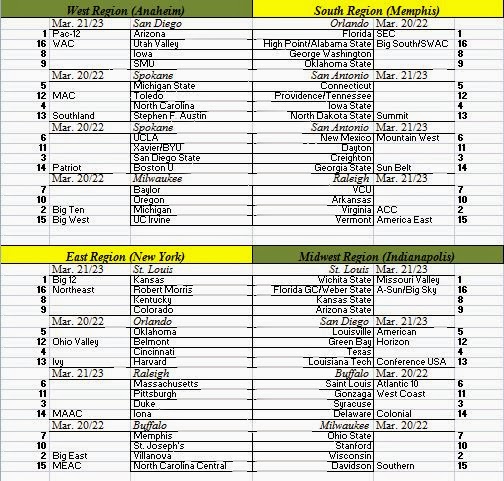 
California dropped their third straight game Wednesday, losing at home to Utah. With their recent struggles, and this being their 12th loss of the season, the Golden Bears are now on the wrong side of the bubble. If it wasn't for that buzzer-beater to defeat Arizona back on February 1, the Bears would be in even worse shape. The Bears are now just 6-10 against the top 100 with losses to UC Santa Barbara and USC. What's keeping them in the hunt is the aforementioned Arizona win, plus wins at Stanford and Oregon. They now sit among the first four out.

Taking their place in the field is Tennessee, who clobbered Auburn by 28. The Vols are still overcoming a sweep at the hands of Texas A&M, but their 35-point drubbing of Virginia now has a lot more weight, thanks to the Cavs winning the ACC title. A huge visit from Missouri awaits on Saturday. The loser will have to work even harder next week at the SEC Tournament.

Speaking of Missouri, they barely escaped with a win over Texas A&M. A loss would have been crushing to their tournament hopes. The Tigers are really hanging their hat on that December 7 win against UCLA. They might need the win over Tennessee more than the Vols do.

Arkansas made it a trio of wins for the SEC bubble teams Wednesday by smashing Mississippi by 30. The Razorbacks have been following up the win at Kentucky perfectly. If they avoid a slip-up late, they're in.

Nebraska scored a key victory at Indiana, a place where the Hoosiers had beaten Iowa, Ohio State, Michigan and Wisconsin. The Huskers are still on the outside, but are very close. Losses to Penn State, Northwestern and UAB weigh down a profile that does have some nice wins over Michigan State, Ohio State and Minnesota. However, a 4-10 record away from Lincoln won't look good to the committee. But it's not something a good run in Indy won't fix.

Dayton did what very few teams are able to do. Win at Saint Louis. That makes nine wins away from UD Arena for the Flyers, which, barring an early exit from the Atlantic 10 Tournament, should put the Flyers in the Field of 68. The only downside is they'll now likely be seeded just above the First Four, which is played on their home court. But I'm sure they'll trade a home game in the First Four for an immediate spot in the second round.

Ohio Valley Quarterfinals (all games in Nashville)
No. 5 Tennessee Tech vs. No. 4 Morehead State, 7:00
No. 6 Southeast Missouri State vs. No. 3 Eastern Kentucky, 9:00

Enjoy the last Thursday of the regular season. It could be the last day without an official team in the field, as Harvard can clinch the Ivy League tomorrow. We will also see Wichita State continue their quest for perfection heading into the dance. So until tomorrow, take care, everyone.
Posted by Bill_Riccette at 6:20 AM