Monday saw three more bids handed out, plus two West Coast teams all but wrapped up their spots in the field. More on that after the bracket.

The bracket has been adjusted slightly to reflect the news that Joel Embiid will miss the Big 12 tournament and is a "long shot" for the first weekend of the NCAA Tournament. The Jayhawks are still a No. 2 seed, but a slip-up in Kansas City could drop Bill Self's club to a No. 3 seed. 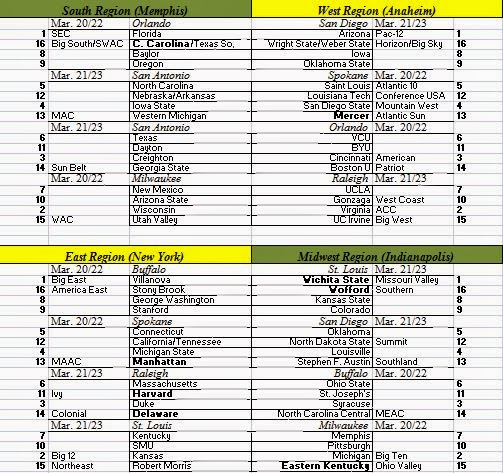 
We are now up to eight spots claimed in the NCAA Tournament as Delaware (Colonial), Manhattan (MAAC) and Wofford (Southern) won their respective conference tournaments Monday.

The Blue Hens knocked off William & Mary 75-74 as Carl Baptiste scored what turned out to be the game-winning layup with ten seconds left, capping a 7-0 run to end the game. A missed shot by Marcus Thornton sealed the victory for YouDee, starting the celebration on the court. On the other side, it was Heartbreak Hotel for the Tribe, as they were looking for their first Tournament berth ever. But they couldn't hang on to a six-point lead with just 80 seconds remaining. Baptiste led the way for the winners with 24 points and eight rebounds. Thornton had 22 in a losing effort (and wishes he had 24).

The classic rivalry in the Metro Atlantic did not disappoint, but it was the Jaspers beating their rivals Iona, 71-68, to punch their first ticket since 2004 and 7th all-time. The Gaels are now sent to the NIT, bringing the field to seven teams. George Beamon had 16 and eight boards and Rhamel Brown added 15 for the winners, who slotted right where Iona was in the seed list. Four Gaels scored double-figures, led by 15 for A.J. English.

In the third championship game, Wofford, the No. 3 seed in the SoCon tournament, knocked off pesky No. 5 Western Carolina, 56-53, as Karl Cochran scored 23, including five three-pointers. It's the third time in five seasons, and first time since 2011, that the Terriers are heading to the Dance. Leading the way for the Catamounts was Brandon Biggs with 17.

The MEAC tournament kicked off with a pair of first round games Monday. No. 4 Norfolk State defeated No. 13 Maryland-Eastern Shore, 78-74, and No. 5 Savannah State knocked off No. 12 South Carolina State, 61-47. The Spartans and Tigers will meet tomorrow in the quarterfinals with the winner to face top-seed North Carolina Central.

IPFW may be the last hope for the state of Indiana to get a team in the field, unless the Hoosiers somehow win the Big Ten tournament. The Mastodons knocked off South Dakota State, 64-60, to set up a championship match against No. 1 North Dakota State, who defeated Denver, 83-48, tonight.

In the West Coast, Gonzaga eased by Saint Mary's, 70-54 as David Stockton dropped 21 to lead the Bulldogs, setting up a championship game versus BYU, who needed overtime to defeat a very good San Francisco team, 79-77. Tyler Haws had 24 and both Kyle Collinsworth (18 points, 12 rebounds) and Eric Mika (11 points, ten rebounds) had double-doubles. This does not please other bubble teams, but I think these wins puts both teams in the Field of 68. The loser tonight will have to sweat a tad, but should hear their name called on Sunday.

By the end of tonight, we will be up to 12 teams officially in the field, as four more spots are up for grabs tonight. Plus plenty more conference tournament action, including what should be a very interesting SWAC tournament. Remember, the conference was given a waiver by the NCAA to allow all ten teams to participate, even though four of them are ineligible, including top-seeded Southern University. The automatic bid will be given to the eligible team that advances the furthest, or in the case of a tie, the higher seed. Here is the rundown.

Today is likely the last day of slight changes to the bracket because tomorrow is the day many wait for. The big boy tournaments get underway, as the ACC, Pac-12. Mountain West, American Athletic, Atlantic 10, Big East, Big 12 and SEC all kick off their respective tournaments. Championship Week is finally here.

Posted by Bill_Riccette at 7:10 AM