Wichita State pulls off a feat that hadn't been done in over two decades, while the NIT field continues to grow. More on that after the bracket. 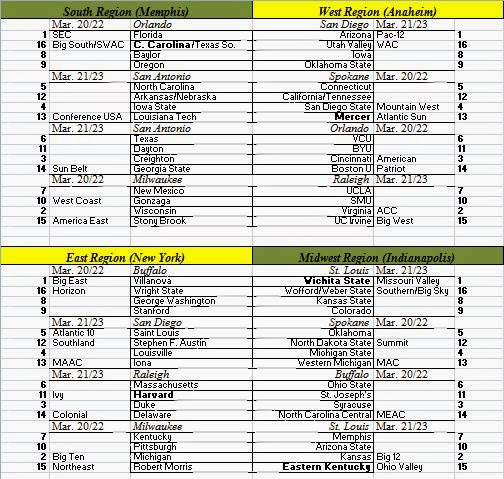 
I think it's safe to say the debate is over. Wichita State defeated Indiana State 83-69 to enter the NCAA Tournament 34-0. The Shockers are the first team to enter the Big Dance without a blemish on their record since UNLV in the 1991 NCAA Tournament. However, the Runnin' Rebels lost in the national semifinal to a Duke team they defeated by 30 to win the 1990 NCAA championship. As we all know, only Bobby Knight's 1976 Indiana club went the distance, winning the national title without a single loss.

Two Shockers posted 20-plus points, including one of the best players in the nation in Fred VanVleet, who dropped 22. Tekele Cotton also had 20. Leading the way for the Sycamores was a pair of 18-point performances by Justin Gant and Manny Arop. The Shockers are now all but assured of being the top seed in the Midwest region, meaning they'll be right back in St. Louis in a few weeks, assuming they escape the first weekend of the tournament.

The NIT is filling up quick as a host of No. 1 seeds all lost Sunday, including Florida Gulf Coast losing at home to Mercer in the Atlantic Sun championship, sending the Bears to the NCAA Tournament for the first time since 1985. Vermont was knocked out of the America East tournament by No. 4 Albany, though the Catamounts were certainly at a disadvantage, having to play a road game as the top seed. Albany advances to Saturday's championship, where they will visit Stony Brook, who is in their third championship game in four seasons, but still looking for the elusive first trip to the NCAAs.

Bob McKillop will not be dancing this year. That's because his Davidson club was upset in overtime by Western Carolina, 99-97, to advance to the Southern Conference championship. These Catamounts will play Wofford in the title game.

Sunday also saw two other Dance tickets claimed besides Wichita, including the aforementioned Mercer, winning at Dunk City, 68-60. Four Bears scored double-figures, led by 15 apiece from Langston Hall and Anthony White Jr. The Bears were the preseason favorite and were able to win on the road in their final Atlantic Sun game, as they will join the Southern Conference next season. The Bears are likely either a 13 or 14-seed.

The third team claiming a spot Sunday is another one ending a long tournament drought. For the first time since 1993, Coastal Carolina is dancing, after they defeated Winthrop 76-61 to win the Big South. Warren Gillis had 22 points and seven rebounds to lead the team that will arguably have the best nickname in the tournament, the Chanticleers. CCU will most likely have to win a game to get into the Round of 64, because with an RPI of 197, they're almost certainly headed to Dayton for the First Four.

In other tournament action, Iona and Manhattan won their respective semifinals to set up a third meeting between the New York schools for the Metro Atlantic championship. Delaware and William & Mary moved on to the Colonial tournament final, where the Tribe will be looking for their first tournament bid ever. W&M is one of just five original Division I schools to never play in the NCAAs. Delaware is looking for their first tournament appearance since 1999. And Denver and South Dakota State advanced to the Summit League semifinals, joining No. 1 seed North Dakota State and IPFW, who won on Saturday.

But that wasn't the only action Sunday, not by a long shot.

Maryland, in their final ACC home game, all but ended Virginia's hopes of a No. 1 seed, winning 75-69 in overtime, but not before Virginia pulled off an incredible final shot to force overtime. Seth Allen scored 20 and Dez Wells had 18 for the winners, while three UVA players scored double-digits, led by London Perrantes' 14. The Cavaliers are still firmly on the No. 2 line, but now behind Kansas, Michigan and Wisconsin.

Staying in the ACC, Syracuse seems to have righted the ship, winning at Florida State, 74-58, putting a dent in FSU's at-large hopes. The Seminoles will have to do some work in the ACC tournament, where they will be the No. 9 seed and open with No. 8 Maryland, who would love nothing more than to win their final ACC tournament. For the Orange, C.J. Fair led the way with 22 and Jerami Grant had 16 points and eight rebounds to help Jim Boeheim's team clinch the No. 2 seed in Greensboro.

Two bubble teams were in action and posted very different results. St. Joseph's suffered a setback at home to La Salle, 71-63. The Hawks had a chance to be the No. 2 seed in the Atlantic 10 tournament. Instead, they will be the No. 4 seed, which sets up a potential huge, bubbly quarterfinal between them and Dayton. The loser of that one will have to sweat out Selection Sunday. VCU will be the 2-seed while George Washington is the three.

The winning bubble team yesterday was Nebraska, upsetting Wisconsin 77-68, as Terran Petteway and Shavon Shields each dropped 26 and Walter Pitchford added 15 for the Cornhuskers. Petteway ended up with a double-double and he also grabbed ten boards. The win puts the Huskers in the field as one of the last teams in. Nebraska hasn't danced since 1998. The win also gave Nebraska the No. 4 seed and a bye to the quarterfinals in the Big Ten tournament. Wisconsin had already locked up the No. 2 seed after Michigan State lost to Ohio State.

So after a wild final weekend that now already sees more teams clinch NIT bids than NCAA bids, the regular season is officially over and Championship Week has arrived (save for Tuesday's Penn-Princeton game). Monday will see three more bids handed out, two conferences with semifinal games and and two more conferences start their tournaments. Here is the rundown of games today.

Colonial Championship (in Baltimore)
No. 3 William & Mary vs. No. 1 Delaware, 7:00, NBC Sports Network

Buckle your seatbelts. It's non-stop action from here until Selection Sunday. We'll cover it all right up until the brackets are revealed. It's going to be fun.
Posted by Bill_Riccette at 7:32 AM