The wait is finally over. Selection Sunday has arrived. Today, dreams are realized and shattered. 68 teams will cheer when their name is called. All the others will be left to wonder "What if?"

For bubble teams, it's arguably the longest day of the year. Are you in or are you out? Will be you be breaking out your dancing shoes, or will you sing the sad song called "NIT"?

Today is the day we find out the 68 teams who will compete over the next three weeks to determine the 2014 Men's Division I Basketball champion. We'll spend all week dissecting the matchups and picking our Cinderellas. But before we do that, we have some business to take care of.

First, the next-to-last bracket of the season. I fully scrubbed the field one last time, so the bracket looks different, but I feel it's my best one. 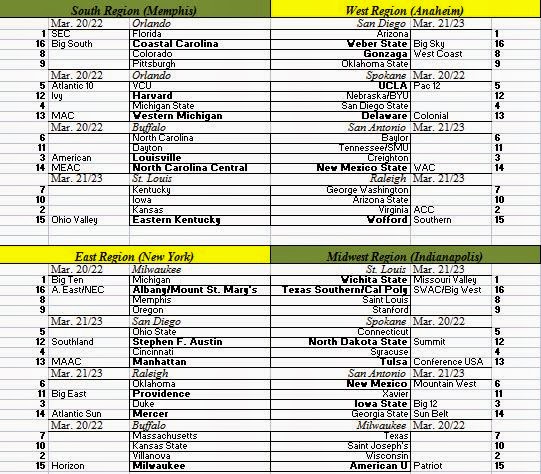 And may I note that Cal Poly will enter the tournament with a 13-19 record (!!!) and two of those wins were against non-Division I schools. Congrats to the Mustangs on pulling the seemingly improbable.

I feel pretty confident that the 68 teams we have in this bracket will be the 68 announced by Greg Gumbel at 6:00 tonight. (I know, Captain Obvious. Otherwise, I'd have different teams in.)

I say that because with the way bubble teams performed this week, some taking themselves out of play, and there being no bid thieves left (St. Bonaventure, NC State and Georgia all lost Saturday), I think the bubble in a sense cycled back to BYU as the last team in. Providence won the Big East's automatic bid, but I think the Friars were in the field, regardless. Now they are definitely in and do not have to worry about Dayton. As this point, we have Tennessee, SMU, Nebraska and BYU who do have to worry about Dayton.

For fans of teams like California, Arkansas, Green Bay, Southern Miss, Louisiana Tech and other bubble teams, I'm sorry to burst your bubble, but your teams don't have strong enough profiles, which is why your teams will be spending the next few weeks competing for spots in Madison Square Garden in the NIT.

Could I be wrong? Absolutely. But I truly feel the 36 at-larges I selected are the 36 best teams and profiles. Which will make for a great NCAA Tournament.

Of course, there are games still to be played, as five more teams will officially punch their tickets to the tournament just hours before the field is announced. Here is the rundown of games.

The winner here likely grabs a No. 2 seed in the NCAA Tournament; loser ends up on the three-line.

The Hawks played themselves off the bubble with their win over St. Bonaventure. Now, it's about seeding. VCU has a shot at a protected seed if they win.

Sun Belt Championship (in New Orleans)
No. 3 Louisiana-Lafayette vs. No. 1 Georgia State, 1:00, ESPN2

Georgia State rolled through the Sun Belt regular season and could give their Round of 64 opponent some fits.

The third meeting between these two. The Wildcats are hoping for better results, especially better than the 19-point drubbing suffered in Gainesville just eight days ago.

Big Ten Championship (in Indianapolis)
No. 3 Michigan State vs. No. 1 Michigan

Interesting that this is the first time ever that these two teams meet in the Big Ten tournament. The Wolverines will wrap up the last No. 1 seed with a win. A loss opens the door back up for Villanova.

My final bracket will be posted sometime around 5:30 today. By that point, the Big Ten title game should be at least close to finished and all, or most, of the dust should be settled. Enjoy all the games today and I'll be back later today to wrap up Championship Week and get you set for the Selection Show.
Posted by Bill_Riccette at 9:54 PM