Another ticket punched, which also sent another team to the NIT. Plus, a new team sits on the top line. More on that after the bracket. 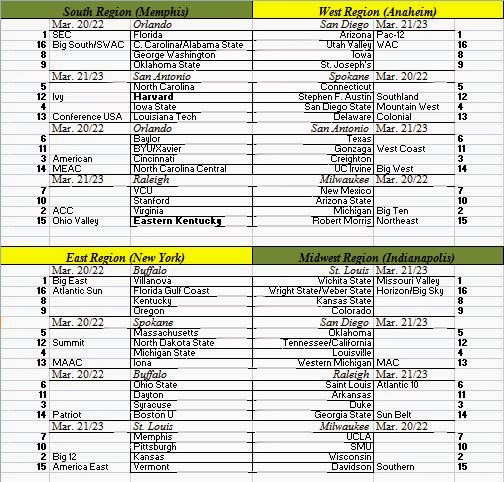 For what seemed like forever, Belmont was a trendy upset pick in the Round of 64, only to disappoint all those who took that chance. This season, we don't even have to worry about Belmont because they will not be dancing this season. The Bruins were upset by Eastern Kentucky, 79-73, in the championship game of the Ohio Valley tournament. Corey Walden scored 29 points and Glenn Cosey had 23 as the Colonels clinched their first tournament berth since 2007. The loss sends the Bruins to the NIT.

Villanova posted a 77-59 over Georgetown as Darrun Hilliard II scored 19 points, one of five Wildcats to score double-digits. Markel Starks led the way for the Hoyas with 20. The loss is the 13th for JT3's club and with a likely 14th coming in the Big East tournament, an at-large bid may be hard to get, despite the five top-50 wins. Weighing down the Hoyas' resume is a season-sweep at the hands of Seton Hall, plus a November loss to Northeastern, who is outside the top-200 in the RPI, though the Huskies are in the Colonial semifinals. Also working against Georgetown is the fact that 2011 was the last time a team with 14 losses got an at-large bid, and that tournament saw five such teams.

As for Villanova, they now sit as the top seed in the East Region thanks to Kansas suffering their eighth loss of the season, a 92-86 loss to West Virginia, though the Jayhawks were without Joel Embiid. Three Mountaineers scored 20-plus, led by Eron Harris' 28. But the game turned into the Andrew Wiggins show, as the freshman sensation and potential No. 1 pick in June's NBA Draft scored 41 in a game where Bill Self's team trailed by as much as 25. No team has ever lost eight games and be a No. 1 seed in the NCAA Tournament. Even seven was a stretch since only three teams prior (Michigan State in 2000 and 2012, Illinois in 2001) have been No. 1 seeds with that many losses.

Villanova is also helped by the fact that they won the Big East championship. As my good friend Chris Dobbertean of SB Nation researched, only ten teams since seeding began in 1979 were awarded a No. 1 seed without winning either the regular season or conference tournament title.

Tennessee all but popped Missouri's bubble, and in emphatic fashion, winning 72-45. The Tigers now likely have to win the SEC tournament, which would include beating Florida in the quarters. The Vols will be the No. 4 seed in the tournament, possibly facing Arkansas in the quarters.

Also in the SEC, Arkansas picked a bad time to return to their road woes, as the Razorbacks lost by 25 at Alabama. Arkansas is now just above the First Four, but cannot afford a slip-up in the SEC Tournament.

California's win over Colorado, coupled with Providence's loss to Creighton, moved the Golden Bears back into the field as the last team in. The Friars are now the second team out and face a crucial game against St. John's in the Big East quarterfinals. The loser is likely headed for the NIT.

Speaking of NIT, that's also where Green Bay is now likely headed after their surprising loss at home against Milwaukee in the Horizon Semifinals. The Phoenix do have a win against Virginia, but losing twice at home to Milwaukee, including in a round that wasn't the championship, will likely doom Green Bay. That, plus the other bubble teams have a full week to claim spots, while the Phoenix have to sit and wait. Wright State, as the higher seed, will now host the championship game, and is the current AQ holder.

Lots of action today, including three more bids being handed out. Here's the rundown of conference tournament games.

Florida State and Nebraska can move ever so closer to bracket, if not climb into the field, with wins today.

Today is the last day of the regular season. The bids will now be coming in fast and furious and the field will constantly change. Selection Sunday is just one week away. Stay tuned.
Posted by Bill_Riccette at 10:58 AM