On Selection Sunday Eve, BYU Moves Back In

The biggest day of the season, save for Selection Sunday has arrived. It's Saturday of Championship Week, where 14 teams will officially claim their spot in the NCAA Tournament. First, let's check out the bracket and then let's talk about a team that is back in the field thanks to other teams playing their way out. 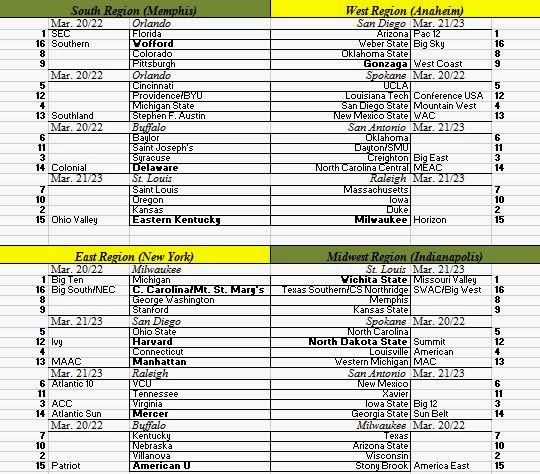 
BYU lost to Gonzaga on Tuesday in the West Coast championship game. Their hopes were likely doomed when Kyle Collinsworth tore his ACL. Yet they find themselves as the last team in today's bracket. Why? Because pretty much every other bubble team that was right on the cut line (Missouri, Minnesota, California, Florida State) could not take advantage of the opportunity. As many have mentioned before, BYU played one of the toughest non-conference schedules in the nation (currently ranks 3rd) and they are just outside the top-30 in the RPI. But as we know by now, it's those four bad losses (Pacific, Pepperdine, Portland, Loyola Marymount all on the road) that is weighing them down. But we've seen time and time again the committee reward teams with strong out-of-conference schedules.

BYU is certainly not out of the woods yet. There are still a few potential bid thieves left, namely North Carolina State, Georgia and St. Bonaventure (who pulled this exact same feat just two years ago). But for now, the Cougars are in the field.

NC State scored a huge win over Syracuse in the ACC quarterfinals and now get a shot at Duke in the semis. However, NC State may have to win it all to get in. Same with Georgia and the Bonnies. Neither have at-larges, but are both capable of winning their conference tournaments. The Bulldogs play Kentucky, the Bonnies take on St. Joseph's, who all but secured their spot by beating Dayton yesterday. The Flyers sit among the last four in.

Tennessee and Xavier both moved out of Dayton and directly into the main bracket of 64. This was a combination of the Vols avoiding a bad loss to South Carolina, Dayton's loss to St. Joe's and reconsidering SMU's profile. The Mustangs do have quality conference wins, including a sweep of Connecticut, but a lack of non-conference wins and a horrendous rating out-of-conference (No. 293) also hurts. SMU has also fallen out of the top 50 in RPI (main reason why Duke moved up to a 2-seed and Virginia fell back to a 3). Larry Brown's club should still get in, but may have to play a road game against Dayton on Tuesday or Wednesday.

In mid-major land, UC Irvine and Utah Valley joined the list of No. 1 seeds to lose in their conference tournaments and both will now play in the NIT. Cal State Northridge, the No. 5 seed, is now the AQ for the Big West, who is now guaranteed a spot in Dayton as as the Matadors have an RPI of 238 and Cal Poly is No. 222 in RPI. The new WAC AQ is New Mexico State, who is in much better position. They project as a 13-seed.

As if the Big West wasn't bad enough, the SWAC pits RPI No. 250 Texas Southern against RPI 301 (!!!) Prairie View. As I read from CBS' Jerry Palm, no team with an RPI that low has ever made the NCAA Tournament. Liberty's RPI rating was 287 last season when they won the Big South.

As mentioned above, Selection Sunday Eve is always action-packed. 14 bids are up for grabs, and it all starts at 11:30 am. Here is the rundown of the title games, followed by the conferences playing semifinal games today.

American Championship (in Memphis)
No. 4 Connecticut vs. No. 2 Louisville, 6:00, ESPN

Today will decide how busy tomorrow will be. Bubble teams will either sweat out the Bonnies, Wolfpack or Bulldogs or the field will be all but set. You'll have to stay tuned to find out. Remember, I will post two brackets tomorrow. One in the morning to gear up for Championship Sunday and then my final bracket will be posted at about 5:30 (hopefully there will be time between the end of the Big Ten championship and 6:00).

Enjoy Selection Sunday Eve, everyone and I will see you all tomorrow.
Posted by Bill_Riccette at 8:21 AM