Jim Boeheim's club really needs to get things going before Selection Sunday. The Orange suffered yet another bad home loss, this time to Georgia Tech. That loss has dropped Syracuse to the three-line and moved Virginia up to a 2-seed.

On the other side of the bracket, Baylor solidified their spot in the field by defeating Iowa State. The Bears sit as a No. 7 seed in today's bracket. Iowa State fell to a four.

A pair of Big East teams picked up huge wins Tuesday. Providence won a double-overtime thriller against Marquette and Georgetown knocked off Creighton to just about end the Blue Jays' hopes of winning the Big East crown. The Friars jumped Tennessee for the final spot in the field and Georgetown is now the first team out.

Let's take a look at the bracket, then check out the schedule of games for tonight. 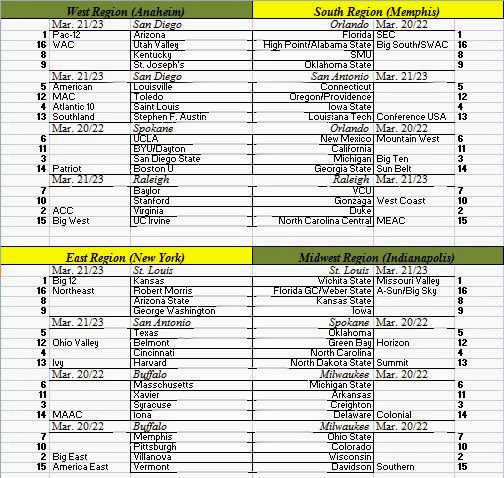 
Today brings the start of three more conference tournaments (one has already started at the time of this post). Here are the schedule of games for those three tournaments.

Tonight also features the quarterfinals of the Patriot League tournament, and here is the schedule

Tomorrow's post will include the start of tournaments in the MAAC, West Coast and Missouri Valley, as well as the Ohio Valley quarterfinals and Atlantic Sun semifinals. Until then, take care and I'll see you tomorrow.
Posted by Bill_Riccette at 10:23 AM