Pittsburgh and Xavier Lose, Atlantic Sun and Horizon Kick Off

We continue our trek through conference tournaments tonight as the Horizon League and Atlantic Sun begin their respective tournaments.

Here, first, is the schedule of tournament games for tonight. All times are in EST.

Two key results from last night saw Xavier and Pittsburgh both lose to draw themselves closer to the bubble. The Musketeers suffered a sweep at the hands of Seton Hall while the Panthers lost at home to North Carolina State, who still has a pulse in the bubble picture, but likely need to make a deep run in Greensboro. Both teams are still in the field, but both are now looking at double-digit seeds for the Big Dance.

Other games of note included North Carolina squeak by Notre Dame at home, 63-61, continuing their chase of a protected seed, and Oklahoma State won by 16 against Kansas State, giving them more breathing room, as they will avoid going 7-11 in Big 12. Even if they lose their finale to Iowa State, their resume looks better with an 8-10 conference record than it would have at 7-11. Plus, all their top-50 wins, including the Kansas win, will be enough to push them in. The Cowboys currently sit on the nine-line.

In Monday's tournament action, No. 7 Colgate defeated No. 10 Navy, 57-51, to set up a quarterfinal meeting with top-seed Boston University tomorrow. The other first-round game saw No. 9 Lafayette win on the road against No. 8 Loyola (MD), 84-71, to advance to tomorrow's quarterfinal against No. 2 American University.

So, because of the light action, not much movement in the bracket. The main movement comes in the middle of the bracket. 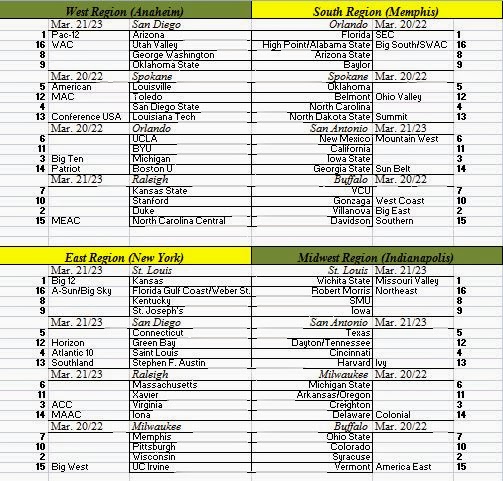 No changes among the last four in, first four out. Pittsburgh replaces Stanford in the "Last Four Byes" group.

Besides the tournament games tonight, we have Iowa State at Baylor; Creighton at Georgetown; Michigan at Illinois; Florida at South Carolina; Georgia Tech at Syracuse; Miami (FL) at Clemson; Georgia State and Arkansas State; Florida State at Boston College; Alabama at Kentucky; Marquette at Providence; Arizona State at Oregon.

The MAC also has key games, as Buffalo (at Akron), Toledo (at Central Michigan) and Western Michigan (vs. Northern Illinois) are all in action and all enter today tied at 12-4.

With that, I'll be back tomorrow as tournaments begin in the Big South, Ohio Valley and Northeast, as well as the Patriot quarterfinals.

Posted by Bill_Riccette at 7:03 AM