The Big Dance and the NIT both have their first official teams in their respective fields. More on that after the bracket and rundown. 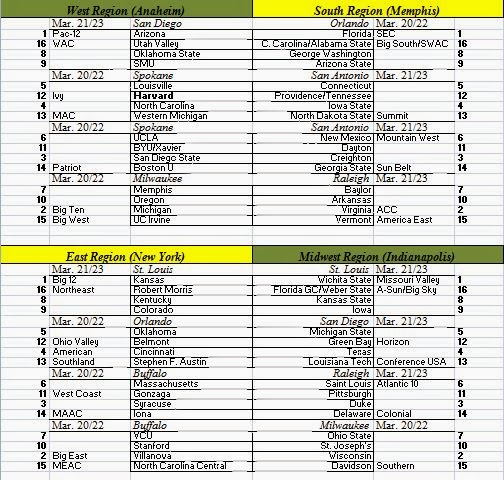 The first official NCAA Tournament ticket was punched Friday, as Harvard defeated Yale 70-58 to win their third straight Ivy League title and become the first team into the Big Dance. Slyani Chambers led the Crimson with 17 points and six assists, Steve Moundou-Missi scored 16 and Brandyn Curry dropped 14 off the bench. Justin Sears of Yale led all scorers with 28 in a losing effort. The Crimson jumped up to the 12-line thanks to a shift in the MAC standings. Western Michigan defeated Central Michigan 78-64, clinching the top seed in the MAC tournament, in the process. Harvard closes their regular season tonight against Brown.

The first official NIT ticket was also punched Friday. That's because Big South regular season champion High Point was upset in the quarterfinals by Winthrop, 62-60, as Keon Moore led the way with 23 points for the Eagles, who advanced to the semifinals where they will face UNC-Asheville. VMI and Coastal Carolina will meet in the other semifinal. The Panthers now receive an automatic bid to the NIT, where they will almost certainly be a No. 8 seed. Coastal Carolina now moves in the current AQ, thanks to their head-to-head victory over VMI in the regular season, as both teams were 11-5 in conference play.

The Shockers are still undefeated. Wichita State "aced" their quarterfinal against Evansville, 80-58, to set up a semifinal showdown with Missouri State, whom the Shockers just beat one week ago. Cleanthony Early and Ron Baker each scored 17 points for the winners and Tekele Cotton (11) and Chadrick Lufile (11) also posted double-digit points. Leading the way for the Aces was D.J. Balentine with 31. The other MVC semifinal will pit Indiana State, who defeated Loyola (IL), against Southern Illinois, who upset No. 3 Northern Iowa.

Belmont breezed by Morehead State in their Ohio Valley semifinal, winning 86-63, as three Bruins starters  and two players off the bench reached double-figures, led by J.J. Mann's 16. Reece Chamberlain nearly had a double-double, with nine points and eight rebounds.

Their opponent in the championship, however, will not be Murray State, as the Racers were upset in the other semifinal by Eastern Kentucky by a score of 86-83. Corey Walden had 24 points for the Colonels, as four starters hit at least ten points. The finals are tonight.

So as I said yesterday, this was the calm before the storm. Today is the final Saturday of the regular season and it promises to be a great one. Plenty of action all across the bracket. Let's start with the conference tournament games, including the second tournament bid being handed out in the Ohio Valley.

And as if that wasn't enough, here's the rest of the notable games today.